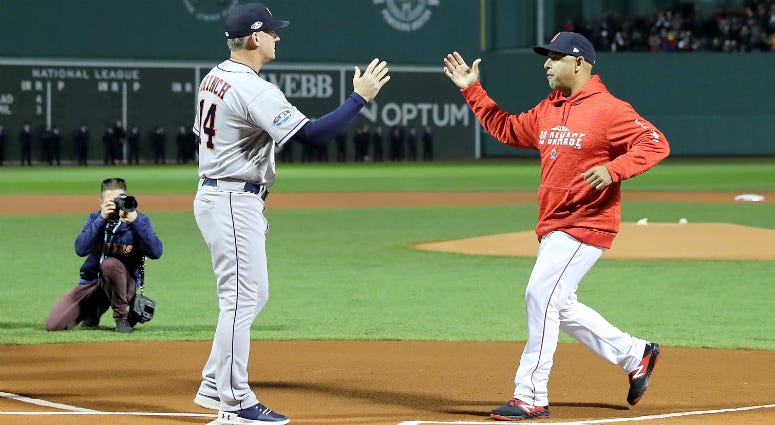 A major MLB cheating scandal came to national attention about not one, but two, teams.

While on their way to a World Series win in 2017, the Astros were stealing pitching signs from the opposing team during home games. This was through the use of cameras pointed at the other coach and the catcher. The batter was informed what kind of pitch was being thrown by the bang of a trash can in the dugout. For example no bang meant fastball, one bang meant curveball, etc.

Even though they signaled their hitters in every home game, it was especially noticeable in the World Series against the Dodgers. The Astros knew exactly what was coming, which explains why their batters were simply teeing off of the Dodgers’ pitchers from the start of the game.

Figuring out signs of the other team is not prohibited, it’s just the use of technology to steal them that’s not allowed. Players standing on second base with an easy view of the catcher are allowed to try and signal the batter as to what pitches could be coming. Deciphering signs has always been a challenge that teams have tried to solve, but never has a team gone so low as to steal signs using hidden cameras.

Not only did that affect who won the World Series that year, it also affected other players’ careers. For example, Clayton Kershaw, starting pitcher for the Dodgers, was forced to sign a significantly lower valued contract because of his so-called ‘failure’ in the World Series against the Astros. The Astros’ cheating made Kershaw look disastrous on the mound when really, he was at an unknown, unfair advantage.

This problem also raises the question: who would have won the World Series? The cheating scandal affected the records of countless other teams besides the Dodgers. Should a different team have another World Series win under their belt? Should the Astros not have as many wins as they did during the season? This entire scandal could also cause distrust in upcoming years. Was this the first time the Astros cheated?

Obviously something had to be done. Jim Crane, the Astros’ chairman and owner, fired manager AJ Hinch and general manager Jeff Luhnow, and they won’t be getting paid for the season. The team lost their first and second round selections in 2020 and 2021, and also had to pay a $5 million fine.

Alex Cora, the Boston Red Sox manager, and former Astros bench coach, was apparently the mastermind behind this scheme. He used a video replay room illegally for deciphering signs given by the catcher instead of for its normal use of studying plays or evaluating swings.

These scandals alter the MLB in very negative ways. It derails other players’ careers, alters stats, and changes the outcome of the biggest series in the MLB: the World Series.