Winners of State-Wide Legislature for Art 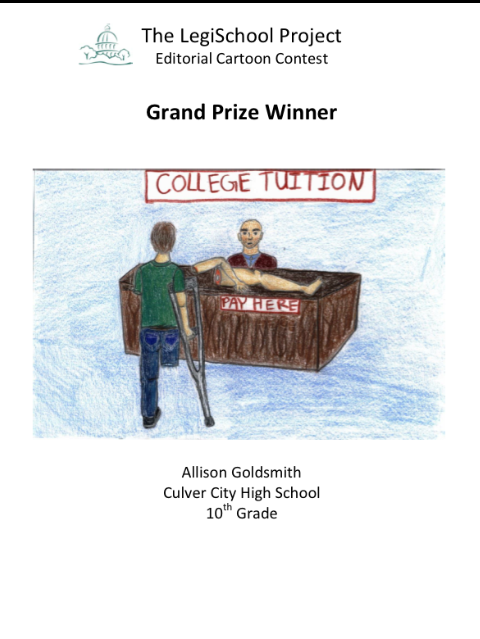 Earlier this year students of the AVPA Art Department were asked to participate in a state-wide legislature administered by the Center for California Studies. The purpose was to create an editorial cartoon focusing on a topic of their choice.
The grand prize winner, sophomore, Allison Goldsmith, drew a humorous cartoon of a man paying for college with an arm and a leg, symbolizing that the cost of college has risen so much that people are going out of their way to pay for the cost. Although she won the competition, she wasn’t expecting to win, saying “I expected a lot of other good entries, and I don’t think my art was that good.”
Art teacher, Kristine Hatanaka, said “I like the project because the art work is placed at the state capital.” About Goldsmith’s art, Hatanaka explained that what Goldsmith acheived in her art was clearly shown and “it’s hard for most students to convey such strong message,” through art.
As for Goldsmith, she “felt pretty honored, but the award doesn’t make me feel amazing, I was just lucky. I hope I win more but I don’t expect to.