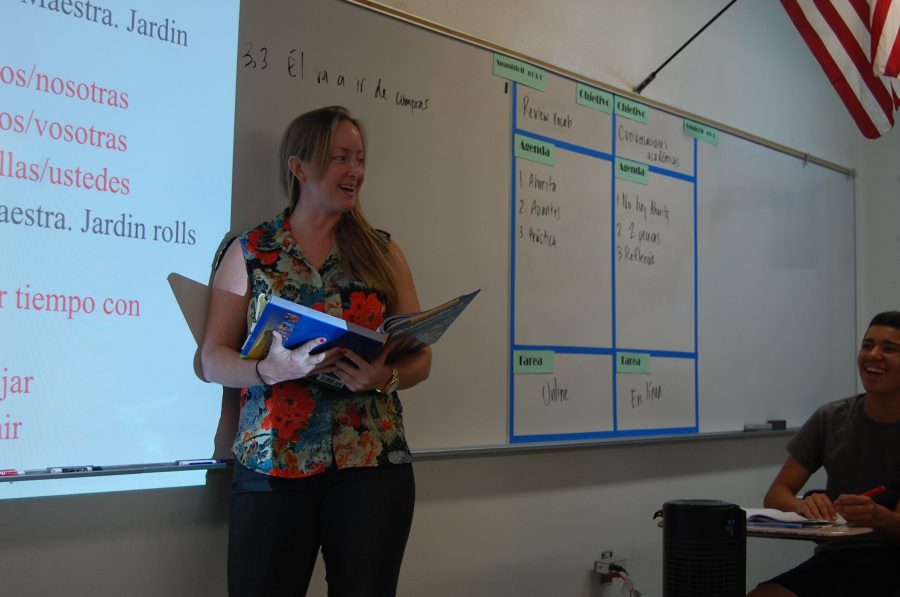 Stacey Harding, or as her students call her Maestra Jardín, is one of the ten new teachers joining CCHS this year. She has been teaching Spanish in high school for 8 years. This year she will be teaching Spanish II and Spanish II Immersion.
Harding has been living in Culver City for the past five years and when she heard of a job opening, she just had to apply. She was hoping to get the job because she had always been impressed with the school’s immersion program. She is very passionate about having a bilingual society and wishes that every school had such a wonderful dual immersion program like the one offered at CCHS.
When asked why she became a Spanish teacher, Harding replied with a laugh, “I have always loved Spanish and talking about the rules of grammar. The only job that you can have by loving these two things is being a Spanish teacher.” Her goals for the students this year include preparing them with a high level of communication, which is why she is having them participate in several Socratic Seminars. For her, communication is the best skill anyone could take when leaving high school.
Harding might look confident in class, but she admits that being a new teacher can be pretty challenging. Sometimes she feels like she is a freshman all over again and said, “I feel lost because I came from a place where I knew everything.” However, the school’s campus isn’t what turned out to be the hardest thing to adapt to. For her, the most difficult thing to adapt to was letting other teachers get to know her.
Outside of school Harding loves to play basketball and soccer. She also loves watching soccer on T.V.  According to her, “the best soccer team in the world is Barcelona.” Besides enjoying those sports, she also claims to be a very good Foosball player.
Harding invites students to come say “hi” and wishes everyone a great year.