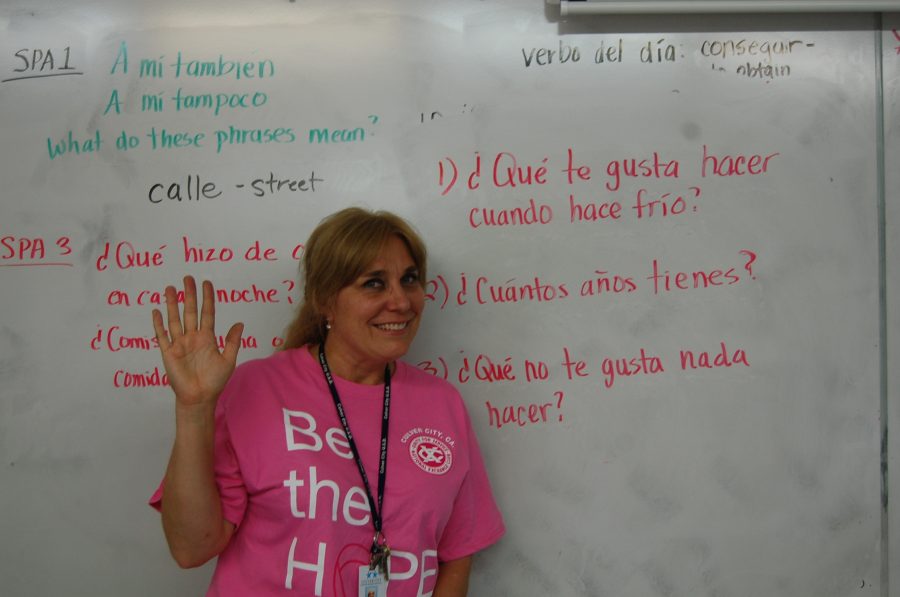 Laura Kilcollins, who was hired this year to teach Spanish I and Spanish III, believes in a hands-on teaching style. “She is very excited about education,” said Melanie De Armond, the Foreign Language chairperson and a member of the committee that hired Kilcollins.
For her trial lesson over the summer, Kilcollins taught students the names of fruit, using a fruit song from You Tube, and then helped them create their own smoothie recipes in Spanish. She frequently uses songs from You Tube to help her students learn new vocabulary, and enjoys creating projects that incorporate culture as well as language. “I always hope they see how much work goes into the classroom,” she said.
According to freshman Maziyah Mayet, Kilcollins’ teaching techniques are quite effective. “The songs she shows us help vocabulary stick in your brain,” she said. Mayet also described Kilcollins as an enthusiastic teacher, who “makes kids want to learn.”
Kilcollins said that the staff and administration at CCHS have been very friendly and supportive. “I feel very welcome here,” she said. Though Kilcollins is new to the school, her husband is a 1979 Culver graduate.
Kilcollins began studying Spanish in high school, and minored in Spanish in college; she majored in literature. While in college, she studied abroad in Salamanca, Spain and Cuernavaca, Mexico. She believes that immersion is very important to learning a language. “You have to be forced to communicate,” she said. Study abroad also benefits students in other ways. “It’s important for students to see that people do things differently in other places and that that’s ok,” Kilcollins said.
Before coming to CCHS, Kilcollins taught at Redondo Union High School and also taught elementary school Spanish for ten years. She originally intended to work in physical therapy, but fell in love with teaching after taking a position as a teacher’s aide at a kindergarten in Long Beach. She often translated for Spanish-speaking parents at the school. “Spanish was my way in,” she said. “They needed bilingual people, and the kids liked me.”
In her free time, Kilcollins enjoys swimming, running, and watching TV shows like Castle and Bob’s Burgers. She is also teaching herself French in her free time. “Comprends un peu,” she said. “I understand a little.”