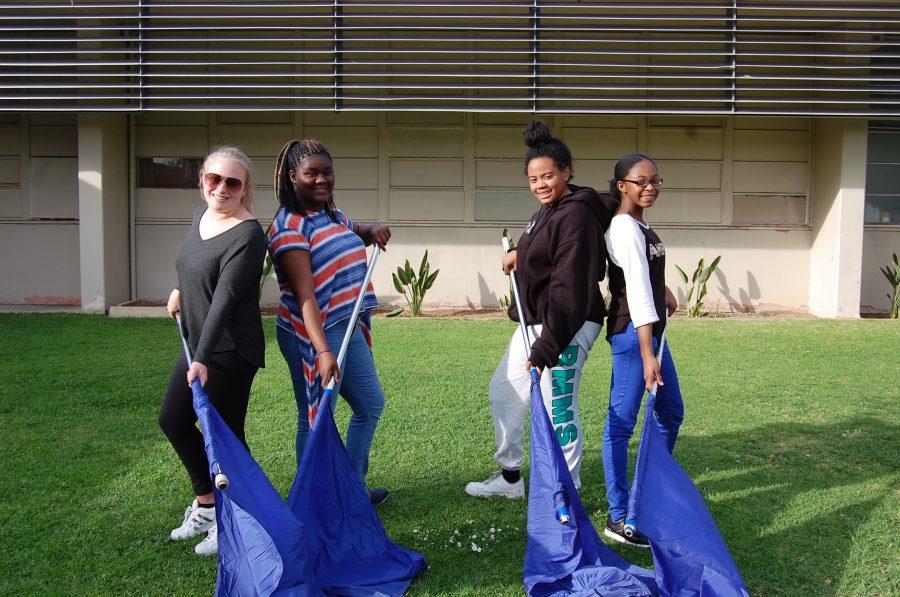 Wondering what Color Guard is? “It’s a sport of the art that uses props, flags, sabers and rifles—dancing to music with the marching band and by itself in the Winter,” Color Guard Assistant Abby Hanna said.

With support from Mrs. Hanna, Dr. Spano, and “Jennifer the security guard”, Johnson and Hanna took their first steps toward their goal, according to Hanna. It was a slow start at first. Many people doubted them despite their efforts and enthusiasm. But the team simply would not give up. “People know about soccer, tennis football and other sports…. So, why not color guard?” Hanna said.

The idea that filled their freshmen heads has only just recently become a reality. According to Hanna, Color Guard has been on campus for “about three months.” Aspiring members audition “around the second semester.” Fairly new to the campus, it struggles to attract new members. Hanna and Johnson are desperate for fresh faces. Too many students have “dropped…during auditions…” Hanna said.

In spite of everything, the fearless team is moving forward in its plans to prepare for formal competition. The pair hopes to make the team officially recognized and eligible for High School Color Guard Competitions. “It’s [such a] unique, beautiful sport…fun and enjoyable…Also, I want to be able to do it while I can. Before I grow old… [It’s] a new experience and High School is the place to try new things.”  Being adventurous is a big theme in high school, and Hanna urges people to take advantage of it.

For now, they are trying to get the word out. “I want the whole school to know about it. Because it’s a beautiful sport…” Hanna said. Admittedly, they also hope for a larger team this year. “Everyone in high school should be involved in something. Color Guard would get people involved and a part of something,” Hanna said.

Hanna and Johnson hope the sport continues to be a Culver activity long after they graduate. “I want to come back…and find it still exists…and hopefully we would have a coach by then,” Hanna said. Perhaps Color Guard will one day become a widely recognized sport. Perhaps they have truly started something.

The rest is up to you…