A New Year Bringing a Close to the Gender Gap 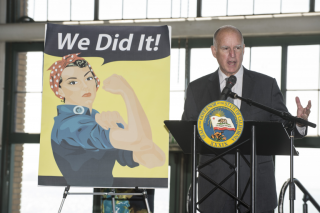 The new year of 2016 is bringing several new changes to society, including new laws. One of these specific laws addresses the problem of significant wage gaps due to gender. Even with the California Equal Pay Act (EPA) of 1949, the wage gap between genders is still remarkably large. A study done by the California Employment Lawyers Association showed that the average woman in California earned an average of 84 cents for every dollar earned by a man. This wage gap becomes even larger for women of different races. The same study also revealed that African American and Latina women make an average of only 64 cents and 44 cents for every dollar earned by white men. What causes even more injustice is the fact that most employees are banned from discussing their pay.This secrecy makes it almost impossible for someone to find out about unfair differences in their pay, much less be able to take action on it.
The previous laws on equal pay contains so many loopholes, making it hard to actually enforce. Many companies use the excuse that the difference in pay is not because of gender but because of other irrelevant factors including differences in experience or credibility. However, these problems are now going to be solved thanks to some amendments being done to the California Equal Pay Act.
On October 6, 2015 the Governor of California, Jerry Brown, signed the bill that will make the California Fair Pay Act the “strongest” state law regarding equal pay. The new law will ensure that employers justify any differences in pay for“substantially similar work”. Their justification now must include concrete qualities such as education, professional experience, technical skills, and seniority.The law also clarifies that an employee’s pay should be equal even if their job titles aren’t the same or if they work in different offices for the same employer. In addition, the law will prevent any employer from reprisal towards a woman asking to see or discuss their pay checks in comparison to their coworkers. This new law will allow women to challenge their bosses without the fear of being discriminated, as described in an article written in the Los Angeles Times. The article explains how a hotel maid can now compare her salary to that of a janitor who cleans conference rooms.
The law was passed unanimously. Supporters of the law agree that it is by far the “toughest law in the nation” regarding wage gaps due to gender. Legislators have also said that the law will allow full-time female workers in California to receive the $33.6 billion annual wages that they have been previously losing.
Opposers of the law argue that the Fair Pay Act will cause California companies  to move their business elsewhere, taking their jobs with them. Others are worried that the new law still does not legally require employers to respond to any of their employees’ requests regarding their pay check. Regardless of the downsides, supporters of equal wages believe this move brings the state closer to reaching gender equality. The law will allow women to ask questions about their pay freely, strengthening businesses in the process. The year 2016 might be the year of equal pay for California.