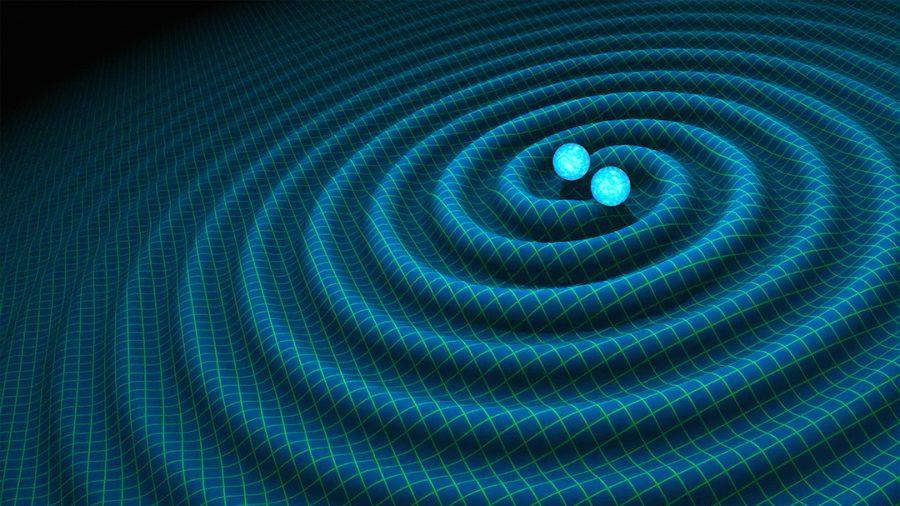 Gravitational waves were first introduced by Albert Einstein, who presented it as part of his Theory of Relativity in 1916. Exactly a century later, we have confirmed their existence. The discovery of gravitational waves will open up a whole new field of studies!
The gravitational waves which we detected, named GW150914, had a frequency from 35 Hz to 250 Hz in range.  It also had  a false alarm rate of about 1 event every 2.03×10^5 years. The name is self explanatory. The wave had a redshift of z=0.09-0.04+0.03. As this was a wave, it is subject to physical changes. A redshift describes the change in wavelength. The larger the wavelength, the more “red” it gets. (The color red has a very large wavelength relative to the light spectrum)
The gravitational waves were produced by two black holes. The two black holes that collided to produce GW150914 had a mass of  36-44 solar masses, or 36-44M☉ and 29-44M☉.  It has a final total mass of 62-44M☉ and radiated 3-55M☉c2 of energy in terms of gravitational waves. The reason the masses of the two black holes does not equal the mass of the resulting merger black hole is due to Einstein’s famous equation E=mc^2. Some of the mass was converted to energy, as we see in the resulting radiated energy.  Furthermore, the black hole merger is known as a binary black hole, or 2 black holes orbiting around each other very close. The final stages of the binary black hole is a kerr black hole. A kerr black hole is a black hole that rotates about an axis, and has special properties of its own.
As gravitational waves bend space-time, the bodies of mass are bent as well. When the gravitational wave passes by a body of mass, it stretches it one direction and compresses it another direction. As it continues, the previously stretched direction is compressed and the previously compressed direction is stretched. However these effects are very minor. In fact, GW150914’ s space-time distortion was about the size of 1/1000 of a proton. The event also occured very fast, as the waves travel at the speed of light.
LIGO, the research facility under operation by Caltech and MIT, take advantage of this fact. LIGO  is a system of two facilities. One operates in Hanford, Washington. The other operates in Livingston, Louisiana. The facilities are a modified Michelson interferometers. Each facility has two arms measuring 2 miles each. The arms are arranged in an L shaped arrangement. Advanced lasers are sent through the tubes and reflected off mirrors. Very sensitive sensors measure the length at all times. When a gravitational wave passes by, it stretches one arm and compresses the other, and visa versa. Although it was a very small change, the LIGO detectors were able to detect the gravitational waves at both facilities, with synonymous data. LIGO also has other environmental sensors. These sensors measure factors such as distant earthquakes and noise vibrations to rule out false alarms.
Any disturbance big enough to affect the environmental sensors would be large enough to set off the environmental sensors as well. LIGO also operates “false signals” which only few know of, to make sure the scientists are doing their calculations accurately.
The community often overlooks other discoveries made with these observations. We also discovered that stellar mass black holes larger than ≈25M☉ can form in nature. This will prove to be a mystery among astrophysicists, as it is unknown how a black hole could acquire such mass. Another discovery was the observation of a binary black hole, or the merging of 2 stellar black holes. Before this, we had no direct observation this would occur, although it was widely accepted among scientists and physicists. We also discovered that such an event could happen within hubble time, or the time which our universe exists.
As a personal note, I would like to say that this is quite an astounding discovery. After 100 years, to confirm something that Einstein predicted in Relativity, is quite unbelievable to me. This may not affect daily life by a whole lot, but it has definitely shaken the field of physics in a way that will create new fields of studies. Every discovery boosts human knowledge, and this just happens to be a big one. I look forward to see what opportunities are created as an outcome of this discovery.