Is CCHS living up to it's expectations? 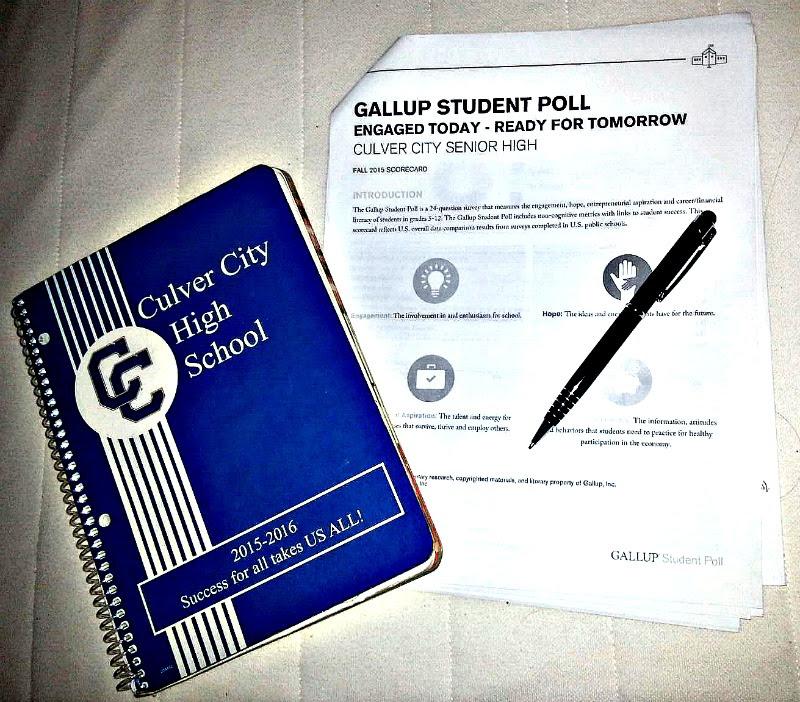 According to Principal Dr. Cooper, Culver City High School supports “each and every student in achieving his/her potential, mastering content, [and] attaining the skills necessary for college and career readiness [by] providing an environment where every student feels connected to and supported by our Centaur community.” Cooper, like many other high school administrators, hopes to motivate students to graduate and be successful in life after high school. An enthusiastic advocate of education, she believes that every student is capable of reaching his/her potential through education. But has Culver City High School lived up to her dream?
In October of 2015, about five hundred CCHS students took a voluntary 24-question survey. This survey was administered through a Gallup Student Poll and measured the level of engagement, confidence, and career/financial literacy. Students were asked questions about how involved they were and how motivated they felt at school. According to the poll, most CCHS students are lacking in engagement, but have high hopes for after high school.
According to the poll conducted by Gallup Inc., forty percent of students are disengaged and, among them, twenty-six percent are intentionally disengaging. The reason behind this, according to the students, is a lack of support by the staff at school. Many students feel that their achievements/potential/special qualities are unrecognized by their teachers and subsequent administrators.  Despite that fact, when Ms. Howard, a CCHS counselor, was asked for her opinion, she claimed she wasn’t aware of students feeling so disengaged and unrecognized. She actually believed the opposite. Student encouragement is promoted almost daily through the fun activities that are always going on around CCHS, including pep rallies, sports, and assemblies. According to Howard, the most recent Intercultural Assembly was “one of the most successful in the past years”. The student crowd radiated energy, their loud voices cheering their fellow peers on. In spite of the fact that poll suggested students in CCHS are disengaged, the actual performance of students leads us to think otherwise.
Moreover, CCHS offers plenty of other opportunities for students to feel encouraged academically. For example, the CSF (California Scholarship Federation) Honor Roll offers recognition to students with “high standards in academics”. Additionally, there will soon be an Achievement Assembly in the Spring, which aims to recognize any student that felt unrecognized in October when taking the survey.
All the previous events could also explain why the confidence in CCHS is so high. Students show their confidence daily in their work and their behavior. The Gallup Inc. poll revealed that students felt confident in graduating from high school and hopeful for the future; however, the poll also showed that 37 percent of students in CCHS felt “stuck”. These students felt stuck because they claimed to have no mentor encouraging their development. Regardless of the mentor or not, it seems like they still felt positive about having a bright future.
For those that struggle with this issue, administrators and staff recommend extracurricular activities. Students could get involved with clubs, volunteering, or one of the various CCHS sports teams. Studies show that there is a strong correlation between involvement in extracurricular activities and academic success. Getting involved also helps out in the long run by adding to one’s college application. Furthermore, while it is important to do well in school, it is just as important to find a hobby that suits your interests and keeps you occupied. Getting involved helps students learn new skills, practice time management, and potentially expose them to people/ideas that might shape the path they pursue after high school.
Another issue brought up by the poll was juggling employment and academics. With homework, clubs, sports, and other extra curricular activities some students find themselves in time constricting situations. According to Ms. Howard, the decision of whether or not to take on a job should be made by the individual. Students considering doing so should also consider how many things they are involved in and how it may affect their studies. In some cases, students may benefit from having a job. Jobs can give students a sense of responsibility. Some jobs can inspire creativity and invest a student’s time into something that they could potentially use in the future.
Although the poll did reveal some areas in which the school can improve, overall the school appears to be living up to its expectations. CCHS has many clubs and opportunities that are offered to students. With the help of all the staff, teachers, and counselors, the school has created a positive environment in which students may carry out their high school educations. There are plenty of resources for students aspiring to greatness.
From clubs to teams to organized events, CCHS is truly an enriching environment. The faculty and administrators would like to note that they are always available for counseling and information. They are eager to assist students in the discovery of their various passions, and look forward to the success and welfare of the students after graduation. In conclusion, the students of Culver City High School are blessed with the means to succeed both in school and in life.