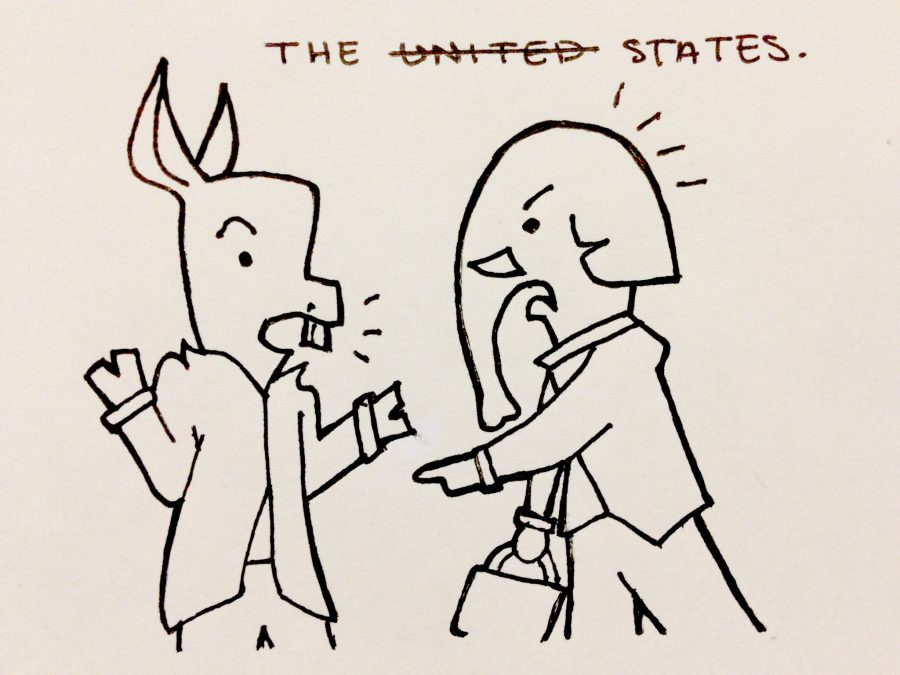 Another four years have come and gone, and another president has been elected. But the election of 2016 was markedly different from its predecessors. From Donald Trump’s infamous comments to Hillary Clinton’s email scandal to the mudslinging and petty insults, every aspect of this election was nasty and sensationalized. Now that it is over, the election has left America more divided than ever before, and the public’s opinions of the Democratic and Republican parties are at an all-time low. Most of, if not all, of these issues stem from the two-party political system in America.
Americans like to pride themselves with living in a democratic nation, or, as they call it, “the land of the free”. But in reality, American voters are restricted to only two choices when voting: Democratic or Republican, liberal or conservative. The problem with this system is that the terms “liberal” and “conservative” are so broad and encompass such a wide variety of politicians that only two parties are not sufficient to represent them. Imagine that you are very liberal. Would you feel as if you were being properly represented if the Democratic nominee was very moderate in his or her views? Probably not, but you wouldn’t have much of a choice on the matter because the Democratic Party is the only liberal party with a chance of winning.
Beyond the issues of representation, the two-party system instills a very detrimental “us versus them” mentality. First off, there are the useless party loyalties; a moderate Republican may have more in common with a moderate Democratic nominee than an extremely conservative Republican one, but he will still most likely vote for the Republican side due to a predetermined bias. Then, there is the polarizing effect it has on the nation, which is more evident now than ever. (You know it’s a problem when the “United States of America” sounds like the punchline of a joke.) And then, of course, you have presidential nominees who devote much of their campaign to ridiculing and demonizing their opponents rather than highlighting their personal beliefs, achievements, and abilities (think of Trump during the presidential debates or Hillary’s ad campaign against Trump). Rather than a competition of who is better, they engage in a competition of who is worse.
Ideally, we should have a political system without parties, as George Washington proposed in his Farewell Address. But due to issues of funding and having multiple nominees with similar beliefs dividing the vote, a multiparty system would be more practical. So what should you do as an individual to bring about change?
If you truly feel as if the Democratic or Republican nominee represents you, you should vote for them. But if you dislike them both, then you should look into voting third party. They may not win, but if they gain even five percent of the popular vote, they will receive millions of dollars in government funding which they can use in their next campaign. This is a huge achievement for smaller political parties, who often find themselves at an insurmountable financial disadvantage during their campaigns.
If you live in an overwhelmingly blue or red state (such as California, which always votes Democratic), voting third party is not “throwing away your vote”, since it has already been decided who will win the votes of the electoral college. Rather, it is an opportunity to help out third parties and impact the popular vote without worrying about changing the results of the electoral college.
And remember, voting third party is always better than not voting at all.