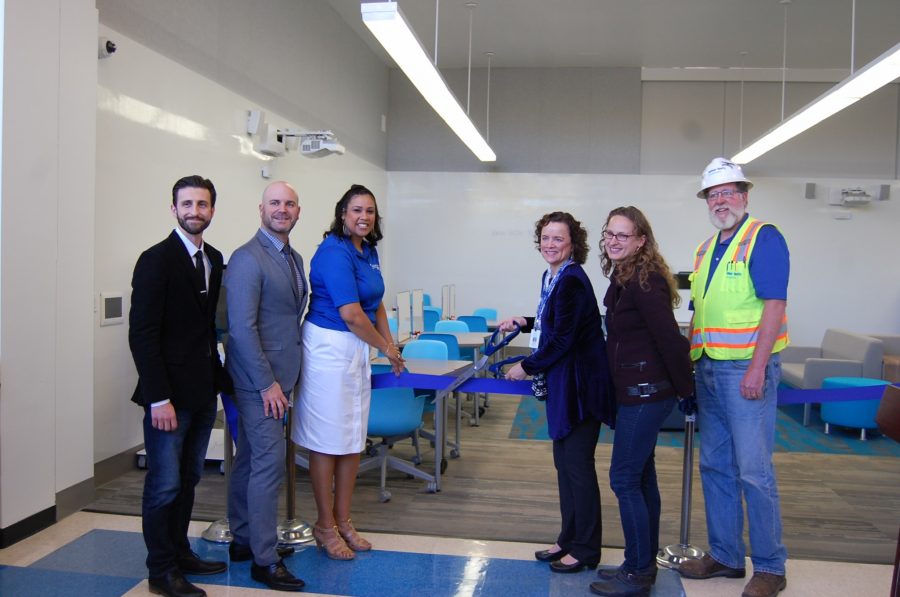 Culver City High School shows a promising future in providing for students as the New Media Center is now officially established within the school’s library. The New Media Center, which has been planned for several years, is finally accessible to all students with the latest educational technology.
This new space provided for students is fully equipped with cutting-edge technology beyond the fancy desks, such as interactive whiteboards and projectors, a surround sound system, 40-inch ultra high definition televisions, and up-to-date laptops. Along with all the new technology comes convenient and easily operated connectivity. The laptops can simply be plugged into the televisions surrounding the Media Center and can even project whatever is on the screen of the laptop to any wall. The walls surrounding the Media Center are built as Walltalkers, meaning each wall is specially built and coated so that it can serve not only as a presentation wall but also as an immense whiteboard. Mason Haro, a junior at CCHS, says, “This new space is really helpful, not only for my individual studying, but also for collaborative and group work.” All this is accessible to the students simply by walking inside the library and using these resources found in the Media Center.
Asuncion Romo, Culver City High School’s Director of Library Services, played a key role in making the New Media Center possible. “I’ve been with the District for a little over 13 years now, and it has always been my vision to be able to offer the students what we call a 21st Century Learning Environment,” he shares, “Being able to provide resources that are current, innovative, up-to-date, and that facilitate on par with a university.” To make this possible, Mr. Romo and the administration started meeting with architects, designers, and planning teams last January to begin working on the project. The administration specifically met with the Loyola Marymount University library staff to receive advice on how they planned their space. Upon evaluation and heavy research into creating the Media Center, Mr. Romo expresses the importance of creating an “…environment utilized as a safe and comfortable space, to be able to provide an area where, no matter where you sit, you have a front row seat.”
Mr. Romo is adamant that this latest technological advancement in Culver City High School facilities is just the beginning. “This space is considered a pilot space for the District. As a District and as a whole, the administrative team will be evaluating this space,” says Mr. Romo. Depending on the results produced by the Media Center, there could be more to come. “We will be looking at components that work really well, and do our best to roll out [those components] to other libraries and possibly even classrooms.”
To recognize this big step for Culver City High School, the library held a ribbon-cutting ceremony with all the administration and other members of the district in the Media Center on January 27, 2017.