36 Days: A Pattern of Mass Violence 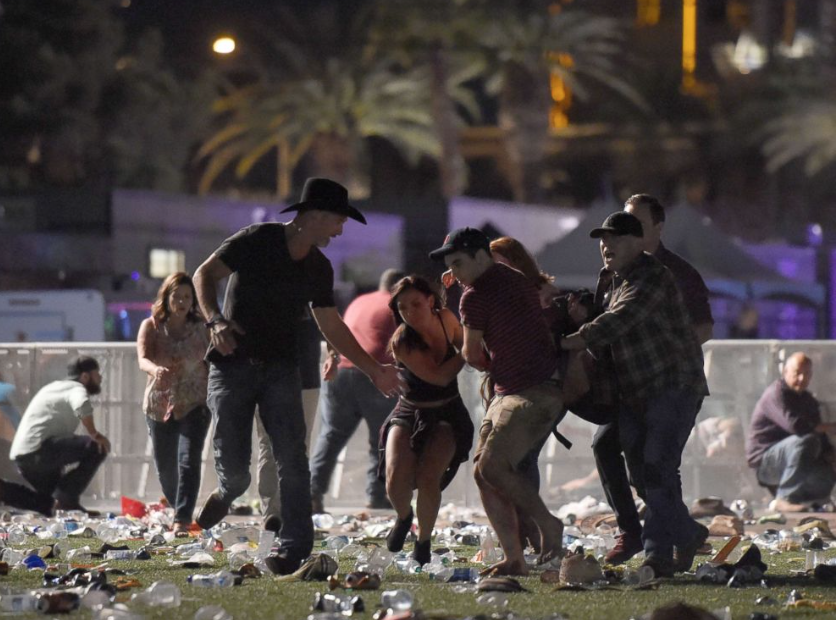 36 days. Three attacks. Two mass shootings – the other a vehicle-ramming attack. 92 people dead – 577 more injured. One in Las Vegas. Another in New York City. The last in Sutherland Springs, Texas. Utter devastation.
The first attack occurred on October 1, 2017, in Las Vegas, when 64-year old Stephen Paddock opened fire upon the crowd of 22,000 people attending the Route 91 Harvest music festival. Armed with an estimated 23 guns – 12 of them modified to fire at nearly the rate of a fully automatic firearm – multiple high-capacity magazines, and a large stash of ammunition, Paddock was able to kill 58 people in the shooting, injuring 546 more.
In the immediate wake of the attack, the fierce debate about gun control reignited once more, with liberals and conservatives alike battling back and forth over how this attack could have been prevented. On one side of the debate, Democrats argued for increased gun control, stating that more deaths could have prevented if Paddock was restricted from modifying his firearms to fire at the rate of nearly 9 bullets a second. On the other side of the debate, Republicans argued that tightening gun control would have done nothing to stop the attack and such future incidents.
This partisan divide continued even through the next two attacks, the first involving a truck attack and the second yet another mass shooting. This next attack involved a perpetrator of quite a different sort – Sayfullo Habibullaevich Saipov, 29, a Muslim man who became self-radicalized after following ISIS’s advice on social media. On October 31, Saipov drove a rented pickup truck into a Manhattan bike lane, where he ran over 15 people, mainly cyclists, killing eight and injuring seven. After a one mile stretch, Saipov crashed into a school bus transporting students with special needs, injuring four more, upon which he exited his vehicle and was later apprehended by police.
The third attack occurred in a First Baptist Church in Sutherland Springs, Texas; the shooting was perpetrated by 26-year-old Devin Patrick Kelley. According to reports, Kelley entered the church on November 5, 2017, upon which he fired 150 rounds of ammunition at the churchgoers attending their daily Sunday mass, killing 26 people and injuring 20 others. 8 of the victims were children; another was an unborn child. Unlike the other attacks, however, there was another civilian involved in this incident – former NRA instructor Stephen Willeford, who was armed with a semi-automatic rifle and was able to shoot Kelley twice, causing him to flee the scene. Kelley was later found dead in his vehicle by police with three gunshot wounds, one self-inflicted.
Each of these last two attacks invited debate from both sides of the political spectrum – the second, a battle over immigration and a call for more “extreme vetting”, the third, yet more fodder for the ongoing argument over gun control. In all three attacks, the perpetrator killed a significant number of people, with no regard for whether those people were male, female, adults, children, etc. With such a clear increase in mass shootings over these past few months – and indeed, in these past few years – this does beg two questions – why has there been an influx in mass attacks, and how can we stop it?
Part of the reason may have to do with the fact that more citizens own guns in the United States than in any other country – just over a third of the population. Not to mention, U.S. gun laws are somewhat lacking compared to countries such as Canada, Australia, and the U.K. – all three of which rarely have had to deal with mass shootings since gun laws were tightened in those nations. Not to mention, studies have found that one shooting or killing greatly increases the chances of another happening in the next two weeks – a problem exacerbated by the easy access to guns in America.
Of course, these factors do little to explain the uptick in attacks over the past few years – easy access to guns has always been a staple of America. Yet the fact that there is a clear factor associated with why the U.S. has so many mass shootings, even compared to other large countries such as China or India, should suggest that we should perhaps act based on that specific factor.
In the end, the only way to stop this needless violence is to tighten gun laws – it is no coincidence that the country with the most mass shootings is also the country with the most guns – more than even war-torn Middle Eastern countries such as Yemen. While this won’t prevent attacks such as the one that occurred in New York City, it will do much to prevent attacks in the United States as a whole, particularly mass shootings. Perhaps by learning from this constant, senseless violence may we finally be able to put an end to these mass shootings for good.