It’s just all one big family 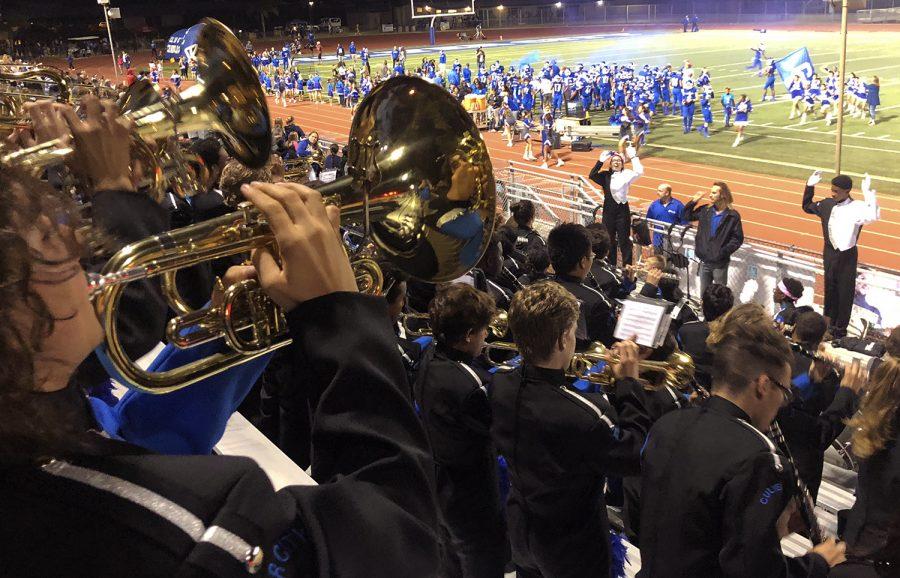 Tucked away into a faded white building in the back of the staff parking lot of Culver City High School, Room 94 is a large-but-small converted welding room that, despite its drab exterior, is instantly recognizable as the home of some of the most closely-knit students on campus. Walk into the building, and you’ll find that it’s bursting at the seams – figuratively and literally – with students of all backgrounds, brought together into this singular space because of a single shared passion – band.
For many students at CCHS, the school band has become an integral part of their academic and social lives, serving as an outlet through which they can express their passion for music amongst a community that shares that same passion. “It’s the idea of an arts group,” music teacher Dr. Tony Spano said. “The students have trained at a very high level and have come together to create something they have worked hard to achieve.”
Dr. Spano, who is also Creative Director of Music and Co-Director of the CCHS Academy of Visual and Performing Arts, has had the opportunity to experience his students’ passion firsthand for 20 years. Yet he has never seen quite the level of interest in band as in this school year; whereas band participation hovered around 30 to 50 people for much of its existence, that number has since jumped to 90 students, many of them freshmen. Spano credits his counterpart Paul Witt’s “excellent instrumental program” over at the next door Culver City Middle School for much of the increase in participation, as many of the current musicians in the high school band begin their careers in elementary or middle school.
The band itself is composed of two kinds of bands – the marching band, which typically plays popular music and can often be seen at school football games and community parades; and the concert band, a formal ensemble that performs at various concerts and usually plays more traditional music. The band as a whole has been invited to perform at numerous events, from Royce Hall at UCLA to California Adventure at Disneyland Resort – invitations that Spano says has “really brought the band to a higher level.”
Of course, for the students, the most important part of band will always be the sense of familiarity that seems to be unlike anything else at CCHS. Senior Isa Berliner, one of the two drum majors in the band along with fellow senior Jairus Montgomery said, “Band always has a certain feeling about it – a sort of shared dorkiness, a sense of comfort with each other. It’s like a family – an immersive group that basically brings people from all parts of the campus together.”
Sascha Goldsmith, a second year music student, described some of the intersectional rivalries – “sibling rivalries”, as Berliner put it – that range from an apparently faux-intense standoff between the flutes and the clarinets to a rap battle between two musicians. “It’s all in good fun,” Goldsmith said. “I think that it really helps to show the unique sense of family we have here.”
Yet funding could get in the way of this sense of community – though grants from community sponsors both big and small have certainly helped to fuel the band’s success, money is still a major issue when it comes to essentials like purchasing additional instruments, obtaining the rights to popular songs, buying equipment and show elements for the marching band – all of which costs tens of thousands of dollars. The increase in participation has also led to a need for more space for the band, an issue that the school is still working hard to solve.
Yet even in spite of its financial struggles, the Culver City High School band still remains a community and artistic group that simply can’t be found anywhere else. As Berliner said, “It’s just all one big family.”