Bohemian Rhapsody Review: For Families not for Fans 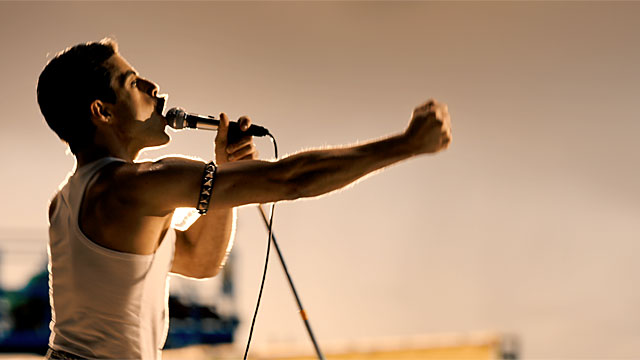 The highly awaited Queen biopic Bohemian Rhapsody recently came out to a generally well-receiving audience. Rami Malek, the film’s star, was celebrated for his Oscar-worthy performance as Freddie Mercury. The soundtrack, composed of the band’s greatest hits and best live performances, made its way to #3 on the Billboard Music Charts and introduced a whole new generation to the band’s classics.
The film follows Freddie’s rise from a young unknown singer to one of the most beloved and revered voices of a generation. When one of his favorite bands is short a lead singer, he steps up and finds his big break as their new front man. His massive vocal range and captivating style made him an almost instant star. Despite minor hiccups, like controlling music execs and high recording costs, the band stays afloat through their sheer talent and ingenuity. Once the band makes it big, Freddie begans feeling lonely and distant from the rest of the band. He becomes consumed by party life and the poor advice of his manager, causing disagreements in the band. Freddie’s diagnosis of AIDS just adds to his downward spiral, but it still motivates him to put on a huge charity performance that ends the movie with live renditions of some of Queen’s best. The ups and downs of Mercury’s life are well portrayed by Malek, especially when considering he filmed the whole movie with dentures in to recreate the look of the singer’s teeth.
While the movie possesses great performances, it still left something to be desired. The story was widely Hollywood-ified, focusing on dramatized disagreements within the band rather than facts important to the band’s story. Important details were left out and replaced with semi-fabricated facts. The story had many aspects that were surface level, with large chapters of the band’s history just skidded over to appeal to a wider audience. There were parts that seemed boring in comparison to the legendary story of the band. The movie left out some of Freddie’s important relationships, Queen’s major musical endeavors, and some iconic moments in their career. Storylines about Freddie’s sexuality, a big controversy for the conservative time period, seemed glazed over as if to keep the same wide audience appeal. The scenes showing the writing of their biggest tracks often seemed shoehorned in and unrealistic. Even the scene about the film’s namesake track, “Bohemian Rhapsody”, seemed very shallow compared to the epic tale the song told and all of the potential ways the director could have shown the magic behind its composure.
The Live Aid performance at the end was a great conclusion; however, the ending seemed to leave many holes in the story about both Mercury and the band as a whole. This made the movie, like many biopics, a film made for families and those with faint knowledge of Queen rather than longtime fans of the band. Overall, the film had many aspects that were well done, like the editing, acting, and musical integration. But though it was entertaining, the story still had just too many inaccuracies to ignore.