An Opportunity for Students – and the Environment 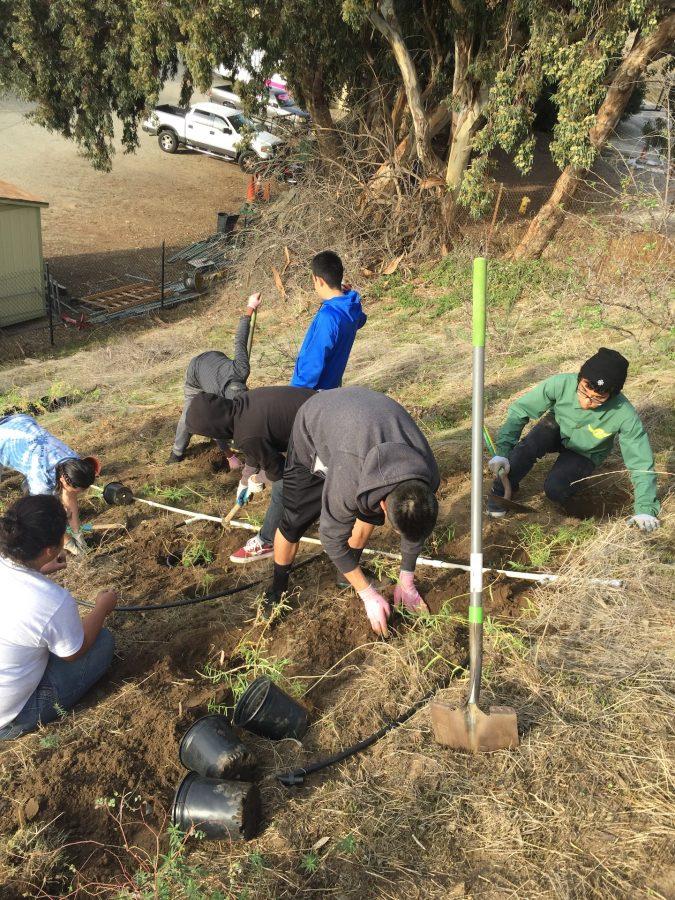 The sky lights up in red and orange as the sun sets over Baldwin Hills – and with it, another workday for the dedicated 40-some-odd students in L.A. Audubon’s state park-specific program for high schoolers. The Baldwin Hills Greenhouse Program isn’t the most well-known environmental program around – but for its students, which mostly come from the nearby Culver City and Dorsey high schools, it’s quickly grown into one of their most important after-school responsibilities.

Students who join the program are asked to apply for one of two categories: Restoration Leaders, who work in habitat restoration – as in weeding, planting native plants, and the such – and Interns, who are asked to attempt a college senior thesis-esque endeavor in designing a project of their own choosing, conducting research, and presenting their findings at the end of the school year. It’s difficult work, and it’s certainly visible in how seriously the students take the program.

Ingrid Carrillo is one such former student. Now a current staff member, Carrillo started out as a restoration leader, doing hands-on work and often teaching children aged 10-11 in one of the program’s many field trips to nearby elementary schools. Such trips typically consist of activities designed to educate the younger students about nature and Los Angeles’s local environment while still remaining fun and engaging enough to keep their attention.

It’s Carrillo’s work as an intern, however, that really shows the importance of this program for students. Her project involved measuring hummingbird abundance in the Baldwin Hills, with Carrillo conducting research at different locations in the state park and presenting her findings to her peers in May. “It was a huge deal,” she said. “I was literally contributing to nationwide data on birds, so the responsibility was very empowering.”

Of course, both interns and restoration leaders aren’t just thrown into these responsibilities without any preparation – a large part of the program involves educating the students about the Baldwin Hills Scenic Overlook state park in which they conduct their work and Los Angeles’s environment as a whole. Students learn to recognize and identify native plants and animals, discuss issues like Southern California’s drought and its relationship with the concreting of Los Angeles’s two major waterways in the L.A. River and La Ballona Creek, and in general grow more connected to the environment and learn to recognize its significance.

“I believe that this program really helps give students a much greater awareness of their local environment,” said program director and L.A. Audubon project biologist Stacey Vigallon. “Students in high school often get stereotyped as typical teens who don’t care about the environment, so this program shows that young people can and do value nature.”

The Baldwin Hills Greenhouse Program has value beyond just environmental education, of course, as shown by the experiences of students like Culver City High School junior Savannah House. For House, the program has helped enormously in helping her to decide her career – she says that it is has helped her specify where to go in terms of her future and confirmed her career path in environmental science. Other graduated students have taken the skills learned in Greenhouse and applied it to opportunities outside of the program, such as college courses. Some, as in the case of Carrillo, have even returned to the Greenhouse Program long after their high school graduation – only this time as staff members.

Said Carrillo about her decision to return: “I saw this program as an opportunity than shouldn’t be taken for granted. Taking the skills I learned here and applying it to college really gave me verification that this is the type of thing that I want to do as a career – so I came back.”

In the end, the Baldwin Hills Greenhouse Program is an incredibly valuable program that not only helps to engage students in the environment and learn about its importance, but also teach them responsibility and help point them towards their career paths. For the students, this program holds much value in terms of their development as young adults who will soon be facing real responsibilities. And for our environment, constantly under attack by politicians – a group that includes our current president – such a program couldn’t be more helpful in helping to raise a new generation of Americans who do, in fact, care about nature.