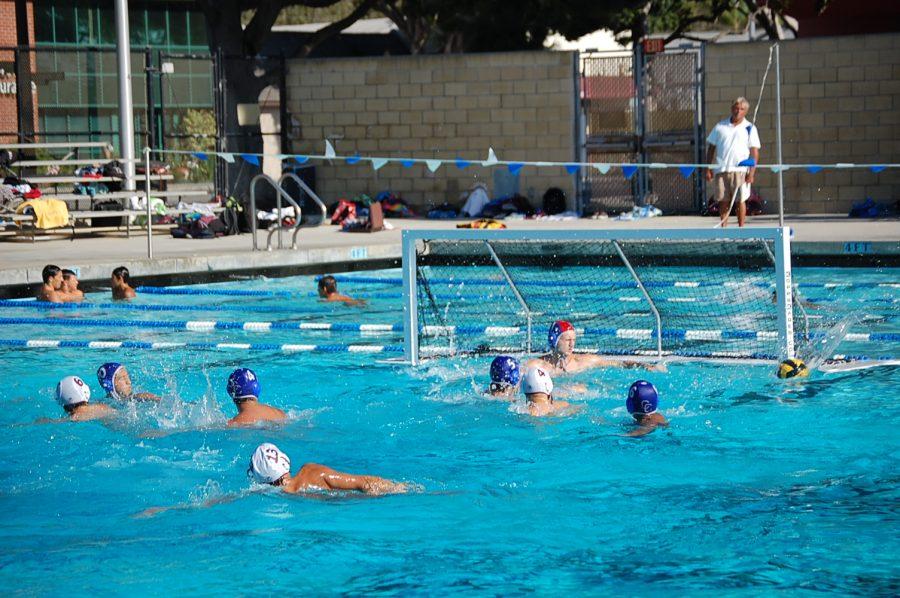 Boy’s Water Polo has been experiencing an outstanding season due to their teamwork and senior leadership.  Culver City’s Varsity team is dominating Ocean League with a 13-5 record and have successfully qualified for playoffs for the first time in five years.
After struggling last season, both of the coaches and players have realized a difference in the team this year.  “They understand the magnitude of what they can achieve,” said Assistant Coach Nestor Dordoni Jr.
Senior Goalie Elliot Stanger attributes the success to the new group of seniors.  As a Co-Captain, Stanger has experienced a lot over the years with the team.  He feels that now, more than ever, the team has a clear focus and even share of the ball.  He also feels that there is a greater amount of support on the defensive end, which adds to the team’s overall strength.
“When we started winning close games such as against Birmingham, Los Amigos, and Beverly Hills, I realized we had a good group this year and that we could go far,” Stanger said.  The Centaurs, who usually circum to Birmingham by ten points, instead won the match 8-7. Stanger had 14 saves, and Senior Lucas Dos Santos had 4 goals.  Senior Captain Kota Ozawa felt that this win gave the team “a lot of momentum” to continue with a strong season.
Coaches Nestor Dordoni Sr. and Jr. feel that the team has benefited most from the familiarity between teammates.  “All of my starters, besides Elliot Stanger, play club together,” said Head Coach Nestor Dordoni Sr.  The players are able to become stronger athletes during off-season from playing two to three times per week together in a winter league.
The team is now looking toward the future of their season.  “Our goal is to make CIF [Playoffs], and then to take it one step at a time,” said Assistant Coach Dordoni Jr.
Ozawa feels that the large amount of seniors this years are more dedicated, and set on achieving their goals, “We are motivated to win because it’s our last year.”
Both coaches are proud of how far the team has come, and feel that they would make it to the playoffs every year if they had their own facility to practice in.  Assistant Coach Dordoni Jr. concludes, “I’ve had a lot of fun coaching this group of kids, it’s hard at times, but they continue to work hard and listen which is always good to see as a coach.”