Student Mental Health During the Pandemic 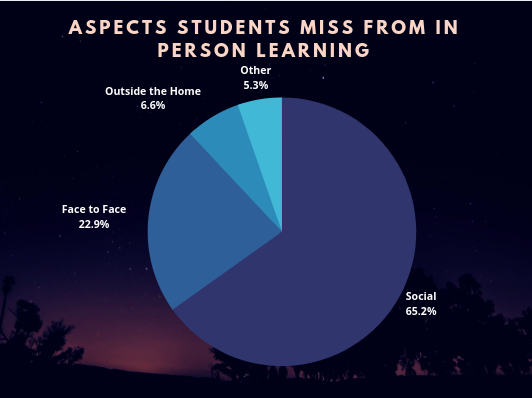 Chart depicting the aspects of in person learning students most miss taken from a student created poll.

This coming March will mark one year of distance learning for students at CCHS – one entire year of social isolation and screens stacked with black boxes and muted microphones. Many aspects of the current pandemic have made the news over the last year, from vaccine distribution to protesters refusing to wear masks, but what effects has the pandemic had on the mental health of high school students?

I polled one hundred and fifty students at CCHS to find out. These statistics, along with those taken from the survey administered by the junior class council, were simultaneously distressing and unsurprising.

On average, student mental health has declined. On a scale from one to ten, 18.8 % of students rated their pre-quarantine stress level at a 2, with 62.5 % rating it a 5 or under. During the pandemic, however, these numbers skyrocketed to 24.8 % of students rating their stress at a 9 with 69.2 % above a 5. Clearly, students are struggling with distance learning. After all, three quarters of students said they preferred in person learning. But what is the main cause of this plummet in mental health?

For ninth grader Grace Luis, it’s “seeing and interacting with friends.” Grace isn’t the only one. 65 % of students agree that what they miss most about in person learning is interacting with not only their friends and peers, but also teachers. High school isn’t only about preparing for college and life afterward – for many, high school is an experience, one that an entire generation of students is missing out on. School life has always been separate from personal life, and for some, it’s been a sanctuary where they didn’t have to worry about siblings or parents or neighbors.

Junior Keira Lamb finds it “very hard to be productive when you never leave the four walls of your house and never get a change of pace.” Between distracting siblings and working parents, 57% of polled students agreed that it has become harder to focus and get work done during distance learning. The previous separation of home and school no longer exists, and the accumulating stress from school has nowhere to go.

Keira, like many other Culver athletes, enjoyed the opportunity to take part in PODs, which proved to be the change in pace students were looking for. Friends who hadn’t seen each other in nearly a year were now able to interact in person. But even these PODs have been a roller coaster of uncertainty. After a few weeks of practice during fall semester, athletes had to halt activity until February. The pandemic has reduced decisions to lines of ever changing numbers; any minute, PODs could shut down again.

Of course, this doesn’t address students who aren’t athletes. For many, this quarantine has meant ceasing activities that were previously ways to relieve stress, like music and dance. Social interactions by and large have either been canceled or thoroughly planned beforehand. As proven by the sheer number of students who miss social interaction above all else, deteriorating social relationships will be hard to overcome once quarantine lifts.

While the CCHS administration can do little to aid students with social interactions, it has tried to help regarding other aspects of distance learning. Notably, the administration has implemented weekly Wellness Wednesdays to give students a chance to take a mental health day and catch up on work. But how well have these Wellness Wednesdays done in relieving students’ stress? According to the survey, not too well. When asked to rate how well CCHS has done to relieve their stress, more than half of the students chose a five or lower. A majority of the reasons given for their ratings were related to either workload or a supposed lack of concern on behalf of the administration. One student who helped gather data for the junior class council’s survey wrote that despite gaining data directly from the student body regarding these problems, the administration brushed them off, claiming that it had already solved them.

How much more discouraging could that response be? To put yourself out there, anonymously or by name, only to be told your problems are irrelevant or have been solved? Students know how hard it is to come up with ways to relieve their stress, but they are asking for help. They are allowing themselves to be vulnerable about how hard their mental health has been hit in these unprecedented times, and something should be done to help them.

There is no doubt that the pandemic has been quite the maze to navigate. It seems that for each new path that has been introduced, there’ve been another dozen dead ends. By and large, students are worried about their education and how distance learning will affect them later in life. Sometimes students can’t even find the motivation to get out of bed, and other times they are swept up in a tornado of stress and can’t find a way out.