The Terrible Truth About Private Prisons, And What We Should Do About It 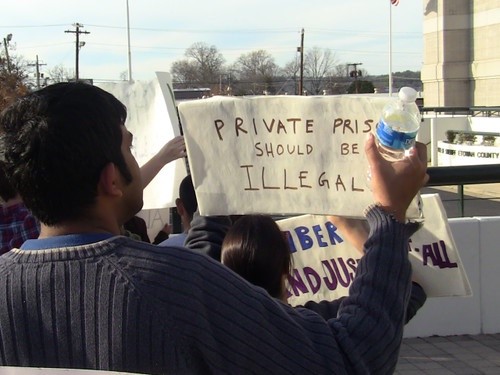 Fairly recently, President Joe Biden had made one of his first acts as the President of the United States to order that the “The Attorney General shall not renew Department of Justice contracts with privately operated criminal detention facilities, as consistent with applicable law.” Essentially, the federal government will be stopping all contracts with private companies that currently manage their federal prisons.

Why? What is so wrong with private prisons?

Well first of all, we need to understand what private prisons and their implications are.

Many people are under the impression that the United States state or federal governments manage all of our prisons and prisoners. In actuality, our prisoners are leased out to private, for-profit prison companies. The major companies are Core Civics, The Geo Group, and The Management and Training Corporation.

In 2017, according to The Sentencing Project, 8.2% or 121,718 of our prisoners nationwide are leased out to these private companies. The private prison industry, according to the Week, is a five billion dollar industry and growing.

Right now about 28 states use private prisons, with the New Mexico Department of Corrections reporting that private prisons house 53% of their prisons population.

Now that we understand a little more about private prisons, why are they bad? Why is Biden banning them?

Well there is an inherent conflict between the private prison industry and the often stated goal that prisons are for rehabilitation.

First, corporations and investors thrive on inmate population growth. This means that they make profit when their prisoners reoffend and are re-incarcerated.  After all, the higher the prison population, the more money these companies make. Second, as a for profit company, the money they recieve isn’t going back into the prison and the inmates as in public run prisons, it’s going into investors’ pockets, remember this is a five billion dollar industry! These factors create perverse incentives that encourage recidivism and cost cutting to the detriment of the prisoners’ rehabilitation and society at large.

We see the effects of the fact that these prisons work for profit in a few ways, it affects prisoner mental health and physical health, it affects the effectiveness of their correctional services, and it puts the guards at the prisons at a significant disadvantage, both financially, and in terms of their workplace safety.

First let’s talk about the previous government’s opinion on them:

The Department of Justice released a report in 2016 that came to the conclusion that private prisons are less safe, and its correctional services are less effective than the prisons run by the government.  Deputy Attorney General Sally Yates wrote in an official memo that, “They [meaning private prisons] simply do not provide the same level of correctional services, programs, and resources; they do not save substantially on costs; and as noted in a recent report by the Department’s Office of Inspector General, they do not maintain the same level of safety and security,”

In the DOJ’s official report they cited a few issues including that contract prisons have higher rates of assaults, both by prisoners on prisoners and by inmates on staff, than government run prisons. In addition, private prison staff were 3 times more likely to be assaulted by inmates than in public prisons in the same report. The report highlights the fact that private prisons are more dangerous for both the people inside them and the people who work in them.

After this report was released in 2016 the DOJ actually planned to stop their federal contracts with private prisons, but it was quickly overturned when Jeff Sessions was appointed Attorney General by Donald J. Trump in 2017. It’s no wonder Trump was against the de-privatization of the federal prisons as Geo Group contributed heavily to his campaign, and them and Core Civics both contributed $250,000 to his inauguration committee. So, the consensus is these private prisons should be gone, but they only stick around through nepotism, and the unethical lobbying of corrupt politicians.

Let’s talk more about the conditions these companies put their employees through:

As we already talked about, prison guards are at a much higher risk of assault and violence while working in private prisons than in their public counterparts. But they also suffer poor working conditions to save private prison companies money. For example, even though private prison guards do the same work they are paid 6,000 dollars less on average a year than guards in public facilities. In addition, to save money private prisons are also chronically understaffed.

In 2017, a Tennessee audit of the prison, Trousdale Turner Correctional Center, and three other Tennessee prisons, all run by Core Civics found that Trousdale was extremely understaffed.  The audit claimed that the Trousdale prison had kept key jobs vacant, stating that the prison “operated with fewer than approved correctional officer staff,” and that the employment data couldn’t be trusted because of  the several, “inconsistencies regarding hires, terminations and vacancies”

A former employee that spoke to NBC news about the audit said that he and other correctional officers, were never trained properly for the job saying, “None of us had a single day of on-the-job training before they turned the inmates loose on us.”

As I said previously, although the private prisons exclusive focus on the bottom line affects the people working at these prisons, the people housed in these facilities face much worse consequences because of the for profit system these prisons run by.

How does the for-profit prison system handle mental health?

According to the Cambridge University Press, over 90% of prisoners have some sort of mental disorder. Well then, you would think these prison companies would invest in mental health services, to treat these highly vulnerable people. Right?

Nope, instead they cut mental services and programs, to save money and make a profit.

Shane Bauer, an investigative reporter for Mother Jones, while undercover as a guard at Winn, a Core Civics prison, found that  mental health services were nearly non-existent. The only way to access mental health services was to request Suicide Watch, however as he says in his book, “ Inmates on Suicude Watch don’t get a mattress; they have to sleep on a steel bunk. They also get worse food.”

He calculated that the food they received is at least 250 calories less than the US Department of Agriculture’s daily recommendations.

The inadequate mental health services at Winn contributed directly to the death by suicide of inmante Damien Coestly. Damien was on Suicide Watch 17 times befored killing himself in his cell at the age of 33.  At the time of his death he weighed only 71 pounds. Damien had been on the waitlist for mental health programs and twelve steps for years. When he’d get appointments with the one part-time therapist he’d often express suicidal feelings, and that he felt like the man he killed was calling for him to join him.

While this is shocking, Core Civics of course is not unique in it’s mishandling of mental health. A similar story happened in California at the Taft facility run by the Management and Training Corporation. Twenty-eight year old Jesus Enrique Zavala was not provided with mental health care after he told the nurses at the prison he suffered from and was medicated previously for anxiety and bipolar disorder, and had already attempted to commit suicide. Instead of providing the mental health care that he obviously needed, they simply placed him in a solitary cell for weeks, where he eventually committed suicide, hanging alone in his cell.

Seth Freed Wessler, another investigative journalist who procured a significant cache of private prison documents under the Freedom of Information Act, including 9,000 medical records found that, “…in case after case, prisoners who were sick with treatable illnesses were not being provided even baseline levels of medical care and were complaining time and again about pain and illness. And in some cases men died as a result…”

In another example, Dr. John Farquhar, the medical director for the Geo Group run prison in West Texas, Big Spring, was told early into his job to stop making so many 911 calls for prisoners because it was costing the prison too much money. In short, a doctor, with a professional duty to care for his patients, was told to disregard their cries for help.

We see this pattern again with inmate Claudio Fajardo Saucedo. Claudio was denied medical care, despite the fact that he had chronic back pain, headaches, and other pains from the minute he arrived, and had complained about it 18 times in 2 years. He only was able to see low-level medical employees, vocational nurses who were supposed to act as support to registered nurses. He was sent back to his cell, time after time, with only Ibuprofen or Tylenol. He collapsed in his cell, it turns out he had AIDS and died a few days later in the hospital. This was obviously a preventable death. He could’ve easily had more time, and could have lived long enough to better himself and turn his life around, if the private prisons actually cared about the prisoners they are supposed to serve.

The use of vocational nurses in the place of trained medical staff is actually rampant in private detention centers. When the Bureau of Prisons sent representatives to check up on how these private prisons were doing, they found that 10 of these private prisons had by pushing nurses to work outside of their legal scope of practice actually broken state nursing practice laws. So, to cut costs, these prisons deny, and ignore requests for medical attention, and when medical attention is given, it is given by an unqualified person. This is obviously immoral, and these companies shouldn’t be give this much power over genuine human lives.

So will this order help?

Well the short answer is yes, this order has the power to cut off as much as 22-23% of private prisons Geo Group and Core Civics revenue eventually.

But in truth it’s way more complicated than that. This order only applies to federal prisons, not state prisons, or Imigration Detainment Centers. Of course, the executive branch has no power over state contracts with these prisons, however Imigrantion Detention centers are regulated by the federal government.

Currently private prisons make about 50% of their profits from immigrant detainment centers, so although this hurts their revenue, it doesn’t take away this major source of it. Which the federal government and president Joe Biden have the power to do. We hear about all the terrible abuses that happen in these detainment centers, and looking at these companies track records, it shows that it is essential to terminate these contracts immediately, and not live by moderate reform actions.

What states can do is ban these immediately following in the footsteps of Nevada and California, who have both issued a ban on contracts with private prisons in their states. However we should look at Nevada’s ban as a model, because it’s ban is absolute, and effective on contracts with any private facilities that provide services like custody and housing, with no or very few exceptions.