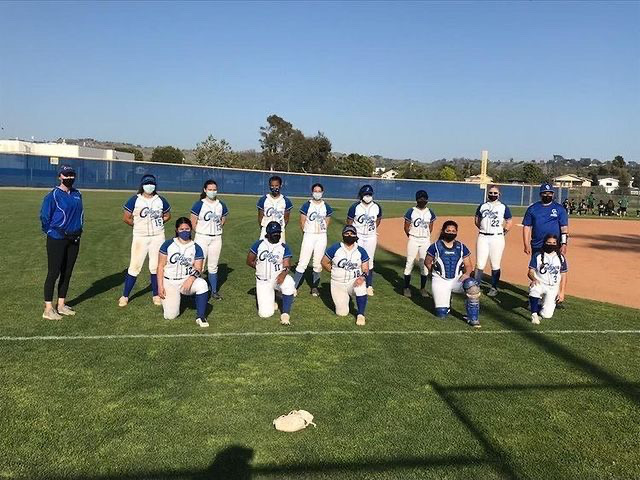 After seven pre-season games, Culver City’s softball team is gearing up for their first league game on April 28. Despite restrictions and constant reminders of how this season is like no other–coaches shouting from behind masks, players sitting distanced outside the dugout–the team has been playing as if there had never been a disruption.

COVID-19 protocols aren’t the only thing that has changed for the team since last season. Coach Peacock, a Physical Ed teacher for the high school, took over as the head coach. At her side are assistant coaches Victor and Tyler, both new to Culver softball and bringing their own unique drills and experiences with the sport.

To say that adjusting to a new team during the pandemic is difficult would be an understatement. The coaches likely haven’t seen the full faces of most of their players. The friendly, physical dugout culture has paused due to social distancing protocols as fewer players are allowed inside at a time. The simple act of throwing drills has had to shift to accommodate COVID safety measures.

Nonetheless, the team has waited all year to get back to playing. Even six feet apart in masks, the chemistry on the field is palpable. Calling out the play each inning, picking each other up after a bad at bat, grins after a strikeout. No mask could muffle the sound of the cheers when Junior Keira Lamb hit a grand slam nor when Taylor Peacock threw the last pitch for a shutout against Da Vinci High School.

As the team moves into the league season, the cheers will only grow louder. The coaches and players alike look forward to competitive play in the next few weeks.