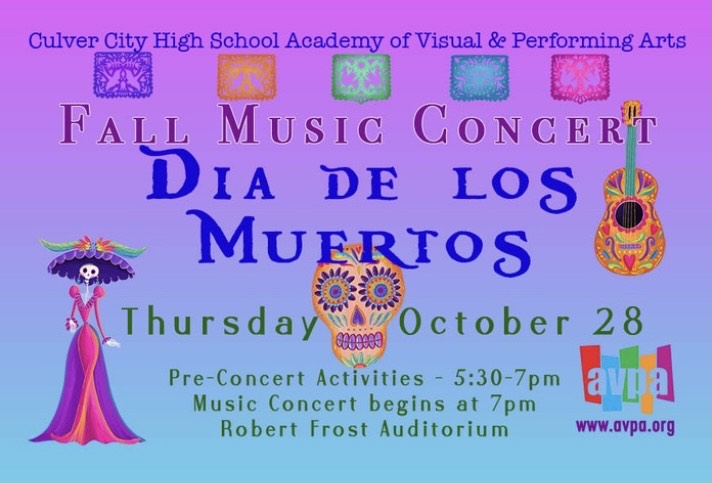 The AVPA school of music will be playing for the first time live since quarantine in their annual AVPA fall music concert. The concert will feature all of CCHS’s music ensembles: AVPA’s Jazz Ensemble, Jazz Combo, and Orchestra, as well as the CCHS String Orchestra and Concert Band. The concert will take place on Thursday, October 28th, at 7pm in the Robert Frost Auditorium. There will be pre-concert activities starting at 5:30pm, which will consist of crafts, food, music, and more.

This year, the theme for the concert is Dia de los Muertos (Day of the Dead), and is different from AVPA music’s usual fall concert theme of Halloween. Dr. Spano, the head of the AVPA school of music explains his intentions behind this new theme, “We’ve been doing a Fall Concert for several years now and have always had a Halloween theme, including a pre-concert carnival and trick-or-treating. We wanted to try something new this year, which also allowed for collaboration with groups outside of the music program. We’re working with La Fuerza de Latinos Unidos. They will help with building traditional altars and decorations, as well organizing the pre-concert activities”.

For what you can expect to hear, the concert will be focusing on music related directly to Dia de los Muertos, music by Mexican composers, or music from Latin America. Among the musical selections, the AVPA Orchestra will perform Music from Coco – the Disney movie that is wholly based on the theme of Dia de los Muertos. The Concert Band will perform Zacatecas, a band march by Mexican composer Genaro Codina, and the Jazz Ensemble will perform Sway (Quien Será) by Pablo Beltran Ruiz.

More information will be shared soon as the date of the concert approaches. That being said, some plans aren’t yet confirmed such as more details about the pre-concert activities. AVPA is planning to have a live Mariachi Band perform then, but it hasn’t been confirmed yet.

All in all, music students are very excited to be back to in-person rehearsals and are even more excited for their first fall concert back at the Front. By the looks of it, the concert should be filled with a variety of different songs, all centered around the new theme of Dia de los Muertos as well as fun activities and delicious food. Save the date and invite your friends and family, and let’s come together and listen to some rich music!