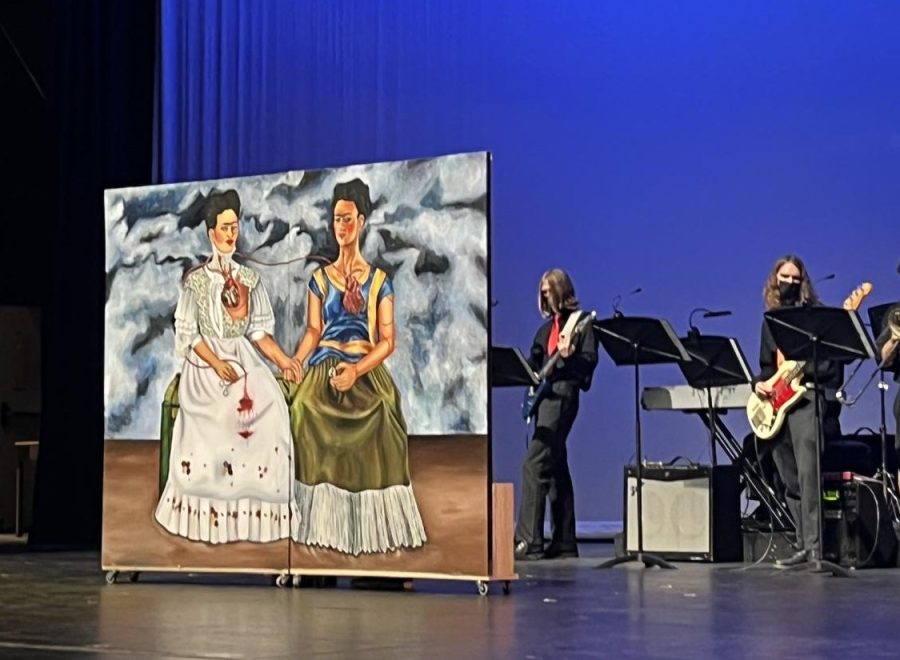 Culver City High School AVPA (Academy of Visual and Performing Arts) is a program that is home to many creative, imaginative teenagers with a passion for the arts. On Saturday, June 6th, these students’ talents were showcased in the annual Java Gala, a collaborative art exhibit and performance. All five departments– film, dance, music, visual arts, and theater– were able to successfully show off their innovation and dedication to the program.

After two years of virtual Java Gala events, AVPA was excited to celebrate the in-person reunion by inviting alumni from previous years to come and enjoy the show. Other guests included families, friends, teachers, staff, donors, board members, and local politicians.

Before the show, hundreds of original pieces of artwork, which were created by high school students, were displayed. Family, friends, and community members were encouraged to view the art during the reception. There was also a separate, smaller Senior Showcase which featured artwork that was made by the graduating class of 2022.

Inside the Robert Frost Auditorium, master copies went on auction,with bids starting at $40 and reaching hundreds of dollars by the end of the night. These pieces, inspired by famous artists from around the world, were recreated by SOVA (School of Visual Arts) students. A raffle was also held to win gift baskets with donations from each department.

During the performance, each artistic branch gave an overview of their work from both the fall and spring semesters.

AVPA dance’s group, the One Body Dance Company, danced pieces with a variety of themes. The show started off with a presentation of Orchestral Dreamscape. A colorful, 80s-inspired dance was performed to the theme song of the The Fresh Prince of Bel-Air. In addition, Tanniah Orr, vice president of dance,  collaborated with the vice president of music, Zachary Kronlage, to show an inspiring dance about the history of segregation in America.

AVPA music’s Pink Elephant Music Company also had jazz ensembles and orchestras play songs throughout the show. Madeline Mosko-Fruend showed talent and spirit in her dazzling vocal performance. CTE Music Tech students showed off their song demos to the audience. These students were able to receive constructive feedback from their peers and learn about the art of composing throughout the year. Notable musicians included Melody Caudill and Carter Coffee, both of whom have more music coming in the future to look out for. Mystic Waring and Diego Brown were others students who presented snippets of their work. AVPA visual art collaborated with music students to make creative album covers.

AVPA theatre’s Blurred Vision Theatre Company was happy to share that their spring musical, Little Shop of Horrors, was their most successful performance yet with record ticket sales. Additionally, honorably mentioned Shakespearean interpretations were given to the audience. Vanessa Andrick gave an award winning monologue which previously won her fourth-place in a state competition. A trailer for “Yellow Face” was shown. Culver City High School was the first high school to put on this production in this year’s fall play, written by David Hery Hwang in hopes of conveying his experience as an Asian-American. Additionally, a comedic scene from the student-directed play “Don’t Come Crying to Me” was presented, written by Dane Thompson and Abigail Cregor. AVPA theater’s improv group, We Lost a Bet, worked with film to improvise a hilarious dubbing of “Falling Too Fast” by Alex Weiss.

AVPA film projected a wide selection of short films directed by students in the program. These included “Seeker” by Isabella Teerry-Dobrovolska, “Delusion” by Paola Fernandez, “Magic House” by Fisher Jenkins, and “Bomb Defusing for the Abducted Adolescent: An Instructional Demonstration” by Thomas Brandt.

AVPA visual arts displayed a life-sized recreation of Frida Kahlo’s “The Two Fridas” for the entirity of the show on either side of the curtains, and connected the two halves towards the end of the event to form one fantastic replica. Upperclassmen in SOVA had been working on the piece of art for months, starting back in April. La Fuerza president, Liliana Ramirez Morales, helped to explain the speech about Frida Kahlo’s life in Spanish.

The grand finale was a synergetic performance that included all five departments, showing the importance of aesthetic choices in art and how they shape the tone and mood of a performance. The atmosphere started off traditional and simple with a black-and-white color scheme, and suddenly shifted to an explosion of sound and color. Musicians played upbeat, joyful tunes. Dancers made their way into the audience and performed among the crowd. Artists painted black linework, adding detail over Andy Warhol-inspired pop art. The Java Gala show ended with rainbow-colored inflatable balls bouncing around the Robert Frost Auditorium, engaging the audience in the finale.

The 14th annual Java Gala was an overwhelming success in multiple aspects. It was a remarkable collaboration that did an outstanding job at showcasing the interconnectedness of the art programs at CCHS. Following the past years of performances on Zoom, this year’s event was the perfect opportunity to make up for lost time and produce something truly extraordinary. Each of the hundreds of students in AVPA made a small contribution to the overall demonstration of talent, and the passion that continues to be present was clear for the audience to see. Those who bought tickets left the event feeling inspired. AVPA is a safe place for CCHS students to let their creativity and imaginations run wild, gaining the skills necessary for self-expression and personal growth. With the talent that these young artists are developing, next year’s annual AVPA Java Gala is bound to be even more impressive!