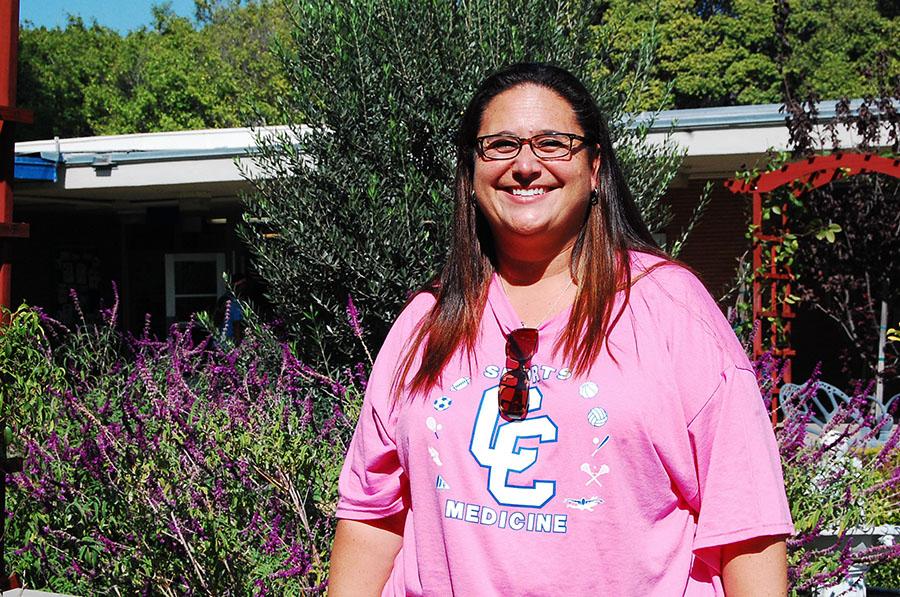 “Do you want some candy?” ask Ms. Gross, pointing at the jar  at the edge of the table, full of candy. Right from the start Gross greets with a warm smile on her face and arms open for a hug. Gross gives off a very friendly and loving vibe that makes you feel right at home. Gross is known for being very genuine and friendly. When asked about Ms. Gross, CCHS senior and member of ASB Chelsi Babino said, “She seemed nice and eager to get to know the kids of Culver City High School.”
Being the new assistant principal, Gross works with attendance and the disciplining of students L-Z, works as athletics director, where she works with coaches, and handles school safety. Gross has had a great start to the year, “I got lost a bunch of times but everyone is really nice…I’m excited to come to work everyday. Everyday I get to meet new people and learn new things.”
As alumni of West High in Torrance, Gross had a passion for sports in school. While in school, she played volleyball, tennis, softball and track for two years and played basketball for four years. Though she went to West High she has a family history of CCHS alumni seeing as both her father and her uncle graduated from CCHS, her dad graduate of  ’61. Gross grew up in Culver and enjoys listening to her dad’s stories of his high school experiences. “It’s kinda cool to hear the stories and now be apart of the campus.” said Gross, with a smile on her face.
Even though she went to West High, Gross worked at North High, before working at CCHS as the new assistant principal, which caused some controversy. “So its kind of crazy, I went to West high school but then taught at North high school, like their rivals. So it was kind of crazy. Everyone always called me a traitor,” said Gross but since her dad taught at North and was the principal of North High, Gross felt she grew up there as well.  She worked at North High for 11 years, where she was a health teacher, the athletics director as well as a coach and worked as a coach at Casimir middle school as well as assistant principal.
Gross began coaching at the age of 16 where she started coaching and refereeing youth basketball, volleyball, softball and soccer for 14 years. “I actually like coaching a lot. I played a lot of sports too, but I like coaching a lot better,” says Gross.
With Dr. Chapman retired, CCHS has to look for someone to take over his position at the school. “When Dr. Chapman retired he was a great part of the team and we wanted to make sure that the person that stepped in was gonna be a great part of the team and she definitely fits that role,” said Ms. Cooper.
When asked how it feels trying to fill the shoes of Dr. Chapman, Gross replied “Dr Chapman is an amazing man. He’s done great great things for Culver City High School and for the city. I definitely can’t fill his shoes… I am just trying to learn all the things that he did and continue his efforts.”
Gross main goals are to bring compassion and help students succeed. “You can tell she is very genuine. She cares about students, our staff, anybody who comes to speak to her. You can tell that when she is communicating with she is listening to you.” said Ms. Cooper, who handles student attendance and discipline for students A-K.
Gross loves working with kids, loves the school and feels lucky to work at CCHS. “I think kids should take the time to get to know her.” Chelsi said. Gross’s door is always open and she always wants to help in anyway she can. “You have to bring that passion and that commitment to help all students be successful in the classroom and all students be successful in whatever passion, in whatever they are passionate about, whether it’s athletics, in music or clubs or whatever it is.”