A Project for Better Journalism chapter
The Centaurian
A&E, Uncategorized

A Night Full of Music and Fright 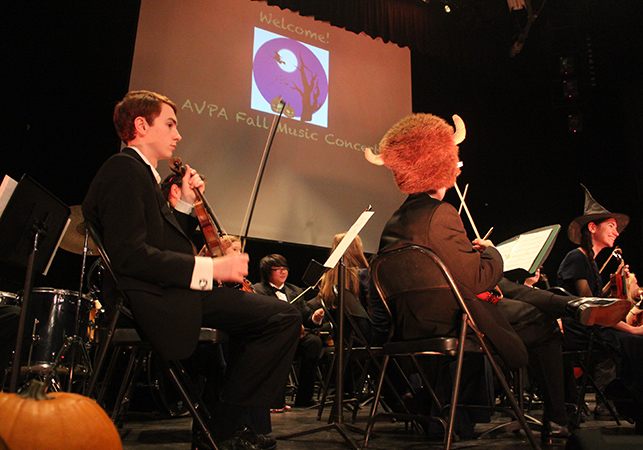 It started with a trick-or-treat event for children to come and find candy in a scavenger hunt around the Robert Frost Auditorium and at approximately at 7pm, the music concert started. When asked about the preparation for the concert, Music Director of the AVPA Music Department, Tony Spano, said “The first idea was to have a Fall concert. At first it wasn’t connected to Halloween at all.”

When the concert had commenced, the AVPA String Orchestra were the first to perform. The orchestra only performed three pieces, and the most interesting of the three was Oliver Berliner’s rendition of “Only in Dreams.” It was incredibly enthralling because of the actors-turned-zombies that ran out during the moments when the Frost would grow dim; he actors were provided by the Theater Department. The last piece played by the String Orchestra was a Haydn piano concerto starring junior, Reno Behnken. This performance was a very compelling interpretation of Haydn’s work.

The second set of the concert was from the AVPA Chamber Singers. They sang a sublime set of songs, including “Hymn of the Night” by Brent Pierce and “Double Trouble” by John Williams, which is famously known to be from the Harry Potter movies.

The third set of the concert was performed by the AVPA Jazz Ensemble. They performed a lively and pleasant set of songs such as “The Pink Panther” by Harry Mancini and “Superstition” by Stevie Wonder. Even our Asst. Principal, Lisa Michel, performed a rendition of Bewitched. Her vocals were very charming and  she did very well on her performance.

The fourth set from the concert was performed by the AVPA Jazz Combo. They played the classic piece “Ghostbusters” from the famous movie franchise. This performance was one of the nights best.

The final set of songs to be performed were performed by the CCHS Concert Band. They performed five pieces that included classic songs and new works from Chris Thomas, a teacher for AVPA Music. In my opinion the best piece to be played was “Dr. Rockenstein” because it was a tribue to classic monster movies by having clips from movies such as “Dracula” and “Bride of Frankenstein,” being played in the background. This performance was significant because it not only marked this concert as a Halloween concert, it was the bands first time to play their instruments with a video playing in the background.

Since the Music Department is one of the busiest factions of AVPA, the question of what was the reason to have a fall concert was brought up. When asked about it, Spano said “I felt it was time to have Fall concert because the regular concerts were getting longer and the quality was rising, which lead to having more music in the concerts.” He felt that although many students were involved in both the Marching Band and Concert Band, they had the quality to learn music for both bands.”

Overall the first Halloween Music Concert was a pleasant performance to watch and it made me excited to see the AVPA Music Department’s future projects.