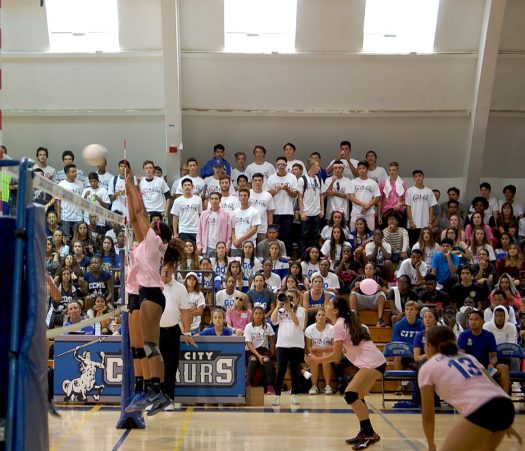 Girls Varsity Volleyball led Culver City High School to victory as they defeated Santa Monica High School 25-23, 25-20, and 25-14 in the annual Dig Pink volleyball game. The gym was filled with students, band members, and other sports athletes as they cheered the girls towards victory.

“This was a huge win for us and a big step towards taking our league title back from Santa Monica this year,” said team member Lena Johnson. This game was especially emulous, since Santa Monica High School is one of Culver City High School’s biggest rivals. The girls spent many hours practicing to perform their best.

“Everybody on our team did a great job of applying everything we’ve been working on in practice both skill-wise and mentally,” explained Johnson. In the end, their hard work and dedication paid off. The girls also gained a lot strength as the crowd cheered them on. Jessica Stewart said, “The turnout was awesome, and I don’t think everyone understood just how much their cheering [helped] increase our energy on the court.” With support from fellow Culver City High Schools students, the Girls Varsity team won with confidence.

This game was especially significant, not only for the proud winners, but for Breast Cancer Awareness. Sharing some personal ties with the fight against breast cancer, the girls sympathized with the cause, making them play even harder to win. “I know that game, I for sure played for Katrina McCoy’s amazing grandmother Pauline, who is a breast cancer survivor. She is the sweetest person I know, and I also was thinking about my own grandmother who passed away from cancer,” said Jessica Stewart. All in all, it was a well-deserved win and a nice contribution to the Breast Cancer cause.