A Project for Better Journalism chapter
The Centaurian
News, Showcase, STEM and Involvement

Space Is The Limit 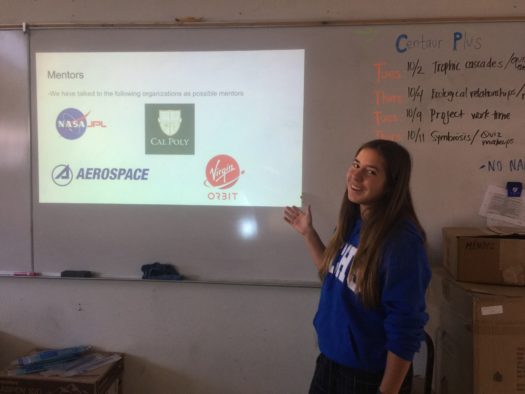 On a Monday afternoon in room 91, sophomore Sophie Doumitt stood in front of some 40 student members of the robotics team to present her conceptualization of CCHS taking part in the future of space exploration.

With the projected presentation behind her, Doumitt explained her plans for a “Cube Satellite”, an approximately 10x10x10 cm low-orbit satellite with a wide range of functions that span from collecting weather data to communicating with Earth or even viewing the universe.

The possibility of CCHS launching a functional satellite became reality as Doumitt revealed the mentors and sponsors willing to help with the project and the logistics involved and inspired the students on the robotics team to take part in this amazing project.

With support from many community leaders and mentors involved in the field of engineering, CCHS is gearing up to become one of the first West Coast high schools to launch a student-built U-class spacecraft into orbit, a “Cube Sat”.

Recently, Doumitt, a member of the CCHS Bagel Bytes robotics team, attended a small satellite conference in Logan, Utah, where she got in touch with several prominent space exploration agencies such as NASA and SpaceX, as well as high school students from Thomas Jefferson High School in Virginia, who have helped introduce the CubeSat program to the student level.

In her game-changing small satellite presentation earlier this year, Doumitt laid out the steps that the team will take towards their making history: first, the Virginia Space satellite company will provide a satellite package including 10 cube satellites, which the team will then build, program, and test with high-altitude balloon launches, all culminating in a launch from the Mojave desert.

While working on this project, the team will have access to several STEM major mentors, including Dr. David Stout, the robotics team’s coach, who is personally “thrilled about the students’ interest in this program as the team continues to gather resources and knowledge for this new project”, as well as Board of Education member Dr. Steve Levin, who will provide connections to and experience from NASA’s Jet Propulsion Laboratories (JPL).

According to Doumitt, Culver High students most definitely have the drive and potential to take this opportunity to expand their knowledge from the robotics room to the thermosphere.  The CubeSat program’s availability to high school students will open many new windows into engineering, space exploration, and STEM for students in Culver City and open up the access of technology and knowledge to the next generation.

Satellite projects made accessible to younger generations will make available the expanse of space to the students of Culver High and the future of engineering and therefore improve our capabilities as a society. “Satellites and space exploration were initially restricted to government and private exploration companies, but the CubeSat program will give students less-expensive [in other words, around $80-100k to build and $40k to launch] exposure to the field of STEM and potential careers,” said Doumitt. “We have endless possibilities. I’m really excited about where we’re going with this.”

Though it may take several years to develop the satellite system, test it, and launch it, many generations of CCHS students will be involved, helping to improve the engagement of the Culver community in science; essentially “everyone will benefit, even if they don’t see the launch,” Doumitt said. This ‘parallel project’ has set new goals for the CCHS robotics team beyond the robotics competition build-season, demo projects, and community outreach.

If space is the limit, then we have unlimited possibilities, because our universe and abilities are infinite.