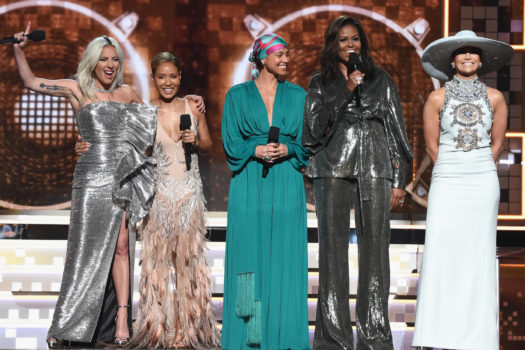 Music’s biggest celebration – the 61st Annual Grammy Awards – took place Sunday night. Despite big name performances and entertaining presentations, the night was relatively uneventful. Television ratings show the event had an all-time low viewership compared to Grammys in the past nine years. However, the event provided well executed entertainment in the form of numerous talented stars as well as fans’ favorite songs from 2018.

The night kicked off with a Latin-infused all-star performance that included Camila Cabello, Ricky Martin, J Balvin, and jazz trumpeter Arturo Sandoval all on an elaborate set resembling an urban apartment building on a city street, complete with flamenco and salsa dancers in colorful outfits.

From there, the show put on several engaging performances by Janelle Monae, Lady Gaga, H.E.R., Travis Scott, and Cardi B. There were also several “mashup” performances, which involved two well known artists coming together to perform. These included pop singers Shawn Mendes and Miley Cyrus teaming up, hip hop artist Post Malone joining up with rock band Red Hot Chili Peppers, and indie artist St. Vincent singing with pop vocalist Dua Lipa. Host Alicia Keys also gave an impressive performance in the form of renditions of her favorite songs on not one, but two separate pianos that she played simultaneously.

The big winners of the night were Lady Gaga, Childish Gambino, and Dua Lipa, all of whom won multiple awards in different categories. One of the most talked about people of the night was rapper Cardi B, who stunned the crowd in a beautiful dress and with a great performance, winning her first Grammy. She received the award Hip Hop Album of the Year for her “Invasion of Privacy” which included hits ¨I Like It¨ and ¨Money¨.

Upon accepting the award, Cardi B brought up her husband onstage and gave a very honest, teary speech, thanking both her baby and her team. She beat out several big names including Pusha T, Drake, and the late Mac Miller. This caused considerable controversy considering the award show invited the Miller’s parents to the show and promised a video tribute to him if he won. Fans were upset by this, but Miller’s parents expressed support for Cardi B’s win.

There were also tributes to late singer Aretha Franklin and the iconic record label Motown. For a 60th anniversary tribute to Motown, Jennifer Lopez teamed up with blues artist Smokey Robinson to perform classics like ¨Please Mr. Postman¨ and ¨My Girl¨. The choice of Lopez, a Latin pop star, to perform classic blues, R&B, and funk songs was controversial. The reactions to her performance were probably the most negative of the night, but the singer still gave a good performance. Acclaimed singer Diana Ross also attended the event, celebrating her seventy-fourth birthday with a bang by performing a number of her hits including “I’m Coming Out” and “Reach Out and Touch”.

As always, there were controversies and upsets. Dua Lipa’s award for “Best New Artist”, beating out acclaimed Beyonce album Chloe and Halle, triggered major complaints on social media, as did Childish Gambino’s “This is America” becoming the first rap song in history to win a Record of the Year Grammy. Childish Gambino’s win garnered mixed reactions, largely due to Childish Gambino’s not being present as well as the wide criticism of the song as not worthy of the award. There was also talk of popularity as being a major factor in singers’ victories rather than the actual quality and production of their music, an argument present in critiques of Cardi B, Childish Gambino, and Dua Lipa.

Opinions aside, the night was mostly well structured and entertaining. There were great performances spanning a variety of genres as well as numerous fan favorite singers. In the end, the Grammys achieved their goal of acknowledging the big names in music, which is all they’re really here for.