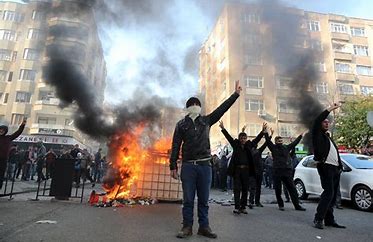 The Middle East has fallen apart in the past few weeks.

It all started with Donald Trump’s executive decision to withdraw American soldiers that had been stationed in Syria to aid and protect the Kurds from outside threats. The Kurds are stateless, meaning that they have no territory but are still their own group of people. The Kurds had recently allied with the United States, making it reasonable that the U.S. should help them.

Instead, U.S. forces were withdrawn, leaving the Kurds vulnerable to attack by neighboring countries. Just days after the U.S. left, Turkish President Recep Tayyip Erdogan declared war on the Kurds.

Turkey made this decision because of their perception of the Kurds as a rising threat, as well as because of their history of conflict with the ethnic group.  The Kurds have turned to authoritarian-run Syria for protection in the absence of the U.S.  Many people do not realize that the conflict is not technically between Turkey and Syria, but between Turkey and the Kurds.

In the midst of the chaos, Russia saw an opportunity to intervene, taking the place of the American forces at the Syrian border and bolstering Turkey.  This has led to Russia’s establishment of a base in Turkey, which it has long been seeking, and which could lead to a concerning shift in power.

Other countries such as France, Iran, Saudi Arabia, Britain, Australia, Qatar, Lebanon, Jordan, Israel, and the UAE are becoming involved as well, though playing smaller roles.  The continuing escalation of this conflict could have monumental effects over time.