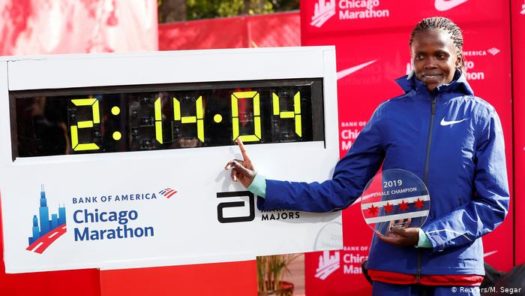 ▲
Kosgei next to her record breaking time

▲
Kosgei next to her record breaking time

October 13th marks the date that twenty five year old Brigid Kosgei became the record holder of the fastest marathon ran by a woman. Kosgei ran the Chicago Marathon, a mixed sex race where she broke the record that had been formerly held by Paula Radcliffe. Paula had maintained her title of fastest woman to run a marathon for a total of sixteen years.

However, Brigid was able to beat her time by a minute and twenty one seconds. Brigid’s time world record time was 2:14:04 while Paula’s was 2:15:25. This was Kosgei’s second time winning the Chicago Marathon and just this past year, she has also won the London Marathon. Since her victory, Kosgei has told the public that she plans on continuing her strenuous training in order to further lower her time.

Viewers noticed that Kosgei wore the same shoes that help Eliud Kipchoge crush the record of fastest male marathon runner. The Nike ZoomX Vaporfly Next% has now been worn by both marathon record holders and will surely be worn by many others attempting to beat their records. According to Brigid, she had no idea that she would be breaking a record on that day. While many people may find this hard to believe, runners around the world probably knew exactly what Kosgei was referring to. Every run is different and it’s impossible to really know when you’ll break your own personal record, or in Kosgei’s case, a world record.

Kosgei has only been running for four years and is now the fastest female marathon runner in the world. I believe that she will serve as an inspiration for many female runners who might think that they will never be able to achieve their running goals due to obstacles like lack of experience.

Kosgei can also serve as the perfect example of how your home life doesn’t need to define what you will be able to accomplish in the future. In her childhood years, Brigid and her six siblings were raised by their single mother. Everyday, she and her brothers and sisters were forced to run to their school in order to make it there on time. Though they were a poor family, this had no effect on Kosgei, who was determined to reach her goals no matter what. Regardless of whether you have little experience or whether you don’t believe you’ll be able to succeed because of the challenges you face in your everyday life, you should never give up on your dreams. You never know what you are capable of.