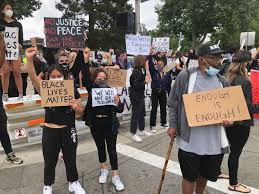 Since the spread of the news of George Floyd’s cruel death by the hands of police brutality and racism, millions of people across the globe have banded together to protest the oppression of black communities in America in the absence of Federal leadership.

Protesters have been marching about government buildings and through significant streets in Venice, LA, Culver City, and Santa Monica as well as kneeling for the 8 minutes and 46 seconds that George Floyd was asphyxiated. Police officers have been known to use excessive force and even arrest innocent protesters while failing to effectively detain looters who were violating the law although curfews during the last several days have been implemented. While most BLM supporters condemn the destructive nature of looting and burning, many claim that it is the only way that enough attention will be directed onto the Black Lives Matter movement as peaceful protests in the past have not led to drastic-enough conclusions as “riots are the voices of the unheard” -MLK.

While our Los Angeles community has been expressing their right to peacefully protest inequality, there are still voices that attempt to belittle the voice of the movement in associating destructive looters that are not affiliated with peaceful protesters. On social media, these people use the trending tags such as “all lives matter” and “white lives matter” as an attempt to either emphasize the equality of all lives or undermine the actions of BLM. However, these views are seen by BLM supporters to be morally flawed. If there is one house on fire, it can be safely assumed that firefighters will go straight to the house that is on fire, they will not prioritize the cat stuck in a tree at a house nearby or check to assure the safety of each house along the way, although the safety of each house is equally important. The burning house must be quenched first in order to begin the holistic improvement of the neighborhood.