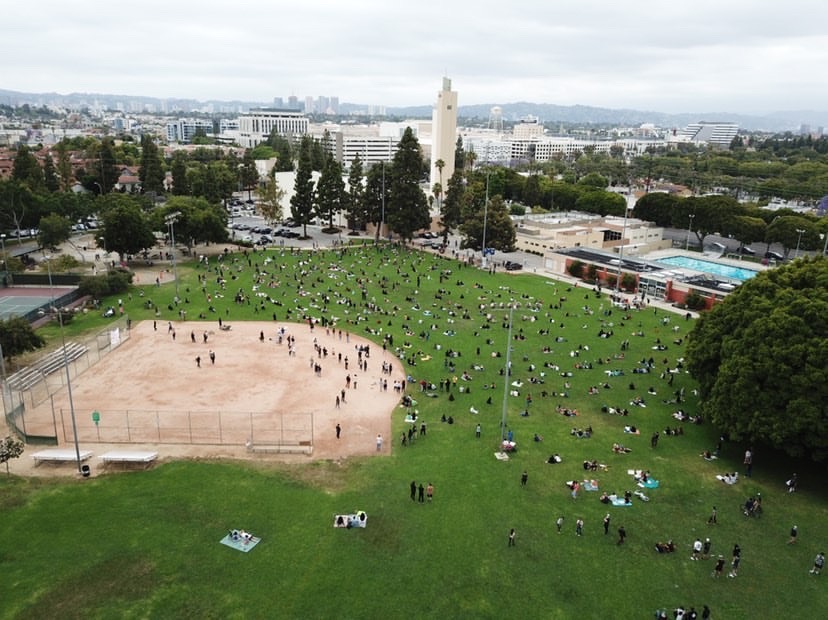 On June 5 as the bells of Veterans Memorial Building chimed noon an estimated 300 people gathered at Veterans park to peacefully show their support to the Black Lives Matter (BLM) movement. The unfortunate timing of this demand for social reform with the covid-19 pandemic demanding social distancing, has led many to refrain from publicly showing up to protest. This particular demonstration was targeted to these community members who are concerned to join in fear of spreading or contracting the virus, thus there were many safety measures in place.

It was a beautiful sight to see families, elders, children, and many students from the high school safely gather at the park, respecting the precautions, each separated 6 feet apart by markings on the grass, and everyone wearing masks. Similar to other ongoing protests, the goal of this gathering was to “get politicians to realize what change needs to be made, kickstart some damn reform in our oppressive and racist justice system,” said protest leader Abigail Cregor. Abigail is a student at CCHS and with the help of her peers they organized this completely student-led event.

Student speakers from the Black Student Union (BSU): Savannah Smith, Ameerah Brown, Dialo Drati, and Imani Lowe came to share some of their thoughts and experiences to bring awareness. Then it became an open mic for anyone to share. Some expressed themselves in song, others with tears in their eyes as they spoke strongly of the problem at hand.

The event also had tables set up at the perimeter of the field, one dedicated to voter registration, another for donations, and one with informational flyers. CCHS students Sami Shanman and Maya Raval helped eligible voters register and pre-register to have their voices heard in upcoming elections. At the donations table CCHS alumna Celine Cuadra began the event announcing a goal to raise $500 but just a half hour later had already reached $5,000 and by the end of the event they ended up raising a total of $20,000! They then sent the money to different organizations throughout the country fighting in the BLM movement. When the demonstration was over we were asked to pick up flyers with information about different cases of police brutality on members of the black community to put up in our neighborhoods to bring more awareness. Starting at Veterans Memorial Park and spreading out to all of Culver City, this event aims to spread awareness and support of the BLM movement to the people of Culver City and bring about some much needed change.