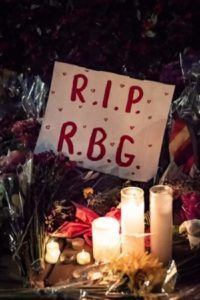 September 18th was the eve of Rosh Hashanah. Chief Justice John Roberts announced the passing of Ruth Bader Ginsburg via social media that evening. Immediately following the announcement, thousands of people began gathering in front of the Supreme Court building. They laid flowers, they lit candles, they left messages, and it was silent.

U.S. Supreme Court Justice Ruth Bader Ginsburg passed away on September 18th of this year due to complications with metastatic pancreatic cancer. She was eighty seven years old, and was the second woman to serve as a justice in the U.S. Supreme Court.

When I heard the news on that Friday afternoon, I was dumbfounded. When I went on Google to look her up, there were hundreds of articles and tweets popping up on my screen by the second. The country was mourning, the Democratic Party was scrambling, and I was still frozen in shock.

I first heard about Ruth Bader Ginsburg when I was in fourth grade, and even then I didn’t know that much about her. I remember hearing her name a couple times, but I didn’t know who she was until my mom explained to me that she was a justice in the Supreme Court. As I grew older, I began to hear her name mentioned a little more and more every passing day. I knew that she was one of the most important people in our government, and that she wouldn’t back down from a fight.

President Bill Clinton nominated Ginsburg to be an Associate Justice of the Supreme Court in 1993, after Justice Byron White retired. She was confirmed by the U.S. Senate in August of that year, and became both the second woman and the first Jewish female of the Supreme Court. She later became the longest serving Jewish justice. She served for twenty seven years on the Supreme Court.

Some of the issues that Ginsburg was most passionate about while she was on the Supreme Court were gender discrimination, abortion rights, search and seizure, international law, voting rights, affirmative action, and Native American rights. However, it were her battles on gender discrimination, women’s rights, and rights for other marginalized groups that earned her the most attention.

The Obergefell vs. Hodges case of 2015 was one of the most important cases that Ginsburg fought on. This was a major case for same sex couples and LGBTQ rights. Multiple same sex couples sued their respective states for not recognizing their legal marriages and for bans on same sex marriage. Ginsberg fought hard in this case, which ultimately legalized same sex marriage in all fifty states of the United States.

Another one of her notable and most important cases was the United States vs. Virginia of 1996. The Virginia Military Institute (or VMI) had been barring women from being admitted into the institution for many years, and the United States filed a suit against the school. They claimed that the school was violating the Equal Protection Clause, which was under the Fourteenth Amendment of the United States Constitution. During this case, Ginsburg made it clear that gender equality is a constitutional right.

Being a young woman in the U.S., I’ve looked up to Ruth Bader Ginsburg so much in the past couple of years. After hearing about her fights for equality and justice, she became one of my idols. She taught me and so many other women and girls that we, too, have a voice in this world and that we shouldn’t stand back and be afraid to use it. She showed me that standing in the shadows and waiting for someone else to speak for me isn’t going to do anything at all. Most of all, she helped me believe in myself and the future of my country. She showed me what it was like to be a survivor and a fighter.

The evening of September 18th found me in my room, scanning my computer screen for anything that might have brought me comfort after hearing of her passing. I read dozens of obituaries, tweets, and articles about her. I saw hundreds of pictures of her. I even spent a couple minutes watching a live video of the thousands of people approaching the Supreme Court building. But it was a quote that I read that evening that made me smile.

“Fight for the things that you care about, but do it in a way that will lead others to join you.”