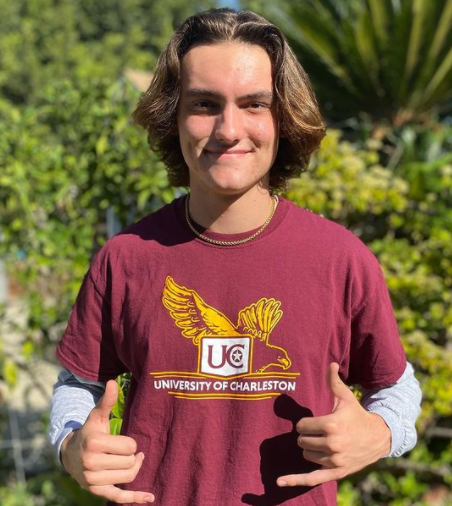 Even in the face of adversity, our centaur athletes have managed to attain college scholarships and sport recruitments. Among such athletes is Brandon Bostel who has committed to the University of Charleston, West Virginia as an opposite attacker for their Men’s Volleyball team. Bostel earned a partial academic and partial athletic scholarship, adding that he “is very fortunate to receive the scholarship [he] did [as] Men’s Volleyball doesn’t bring in as much money as other sports so scholarship offers are less frequent”.

Brandon reflects about the recruitment process, mentioning that it “Was different to say the least, it was not ordinary as it would be any other year in light of circumstances, so it was primarily virtual;” though, he is pleased that he was still invited to visit the school in-person on a somewhat-restricted campus tour.

Because the CCHS Boy’s Volleyball team historically has not been taken as seriously as some other sports, namely Varsity Football and Girl’s Volleyball amongst others, the team does not receive as much funding or resources as many of the players would like. Evidently, it is a bit of a struggle for Men’s VB players to practice at their best when they are still required to take PE courses without any option to practice with their team in a 6th period class. The team tends to “get less funds and less priority [as] they are treated more as an afterschool program”. Brandon therefore took it upon himself, with the help of his coaches, to reach out to college coaches for recruitment.

With the recommendation of his Club Coach, Kevin Endsley of the Manhattan Beach Volleyball Club, Brandon was able to send his University of Charleston coach his stats, highlight reels, and a few full games, and was finally asked to practice with the team on campus as a final evaluation of his skills.

To celebrate this achievement, Brandon spent some time with a few friends and select family members due to quarantine restrictions, virtually sharing this accomplishment virtually with his sister who was similarly recruited for volleyball.

As a word of advice to current and future CCHS athletes, Bostel says it is best to “start reaching out to coaches sooner than later. It never hurts to jump the gun on anything and start early and talk to a coach. The worst thing is to be good enough to qualify but be too late because someone has beat you to the opportunity first.” It is also important to “Make sure that the school is the right fit for you”. As for the recruitment and interviewing process, “Show the coaches how well put together a person you are in as many aspects as you can: be organized, be respectful, and on time because that’s what coaches look for other than athletic skill”.

In the future, Bostel hopes that Boy’s VB “will be a more dominant sport at CCHS as they move into the Bay League which holds some of the best Boy’s VB teams, like Maricosta and Palos Verdes.” He is optimistic that CCHS will be able to advertise to middle schoolers, getting people serious about starting young — getting them excited. With a little more encouragement and awareness of athletic opportunity to prospective players even before high school, CCHS’s Boy’s VB team will be able to achieve a more efficient training season as players will come knowing how to play and already engaged in the sport. Bostel adds that as the team’s co-Captain, it was a consistent stress to scramble for players at the beginning of the tear to have a solid starting line. Regardless, Bostel made the most out of this situation, adding that, his “Culver team gave [him] the opportunity to play new positions and develop new skills to increase versatility as a player, contributing to [his] recruitment.

Before moving back to CCUSD, Brandon spent his freshman year at Pacifica Christian in Santa Monica where he was thoroughly introduced to volleyball. There he met a coach, Charlie Schmitt,  who was like an older brother to him. Under his guidance, Bostel was able to develop the fundamental volleyball skills, including his vertical jump which he considers to be vital to a player’s success, as well as mental and physical strength. Back at CCHS, Bostel was able to gain new leadership roles on the team as Team co-Captain along with Bakari Brown, learning how to be a responsible and influential leader as well as learning about the game itself and the types of players one encounters.

“Having the ability to answer others’ questions and having people look up to you as a source of knowledge felt empowering because [he] was helping to benefit the team. Being able to break down the game and help new people understand it allowed [his] own strategy and analysis of small facets of the sport to increase.” Even through the team’s rough patches, the relationships that Bostel had with his team mates created an atmosphere of perseverance. “Being one of the people that he thought the team could look to during rough games and being a source of inspiration and guidance during games was an amazing experience.”

Bostel would like to thank his sister who was recruited for volleyball a few years prior, as well as his mother who was a Hall of Famer in both volleyball and basketball, as they have been huge mentors to him throughout his interview process and athletic career, helping to inspire him to participate in the sport from the beginning. Bostel would similarly like to acknowledge his coaches, Kevin Endsley and Joe Manzo, as well as his teammates that he had the privilege of leading and training with over the years for their contribution to his highschool and collegiate athletic career.