A Project for Better Journalism chapter
The Centaurian
Features, Opinion 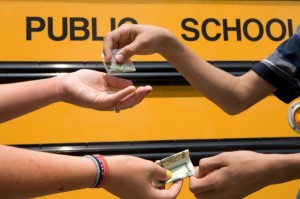 I remember very clearly my first encounter with student drug use.

The situation involved a handful of teenagers – all of them presumably under the age of 18 – laughing and smoking cigarettes outside of the school campus. Stereotypical teenage behavior, so it seemed – and believing so, I failed to report the incident to the school authorities. Instead, I walked away guiltily, still thinking that these types of actions were the norm.

I tried to assuage my doubts, telling myself that while what those teenagers were doing was wrong, it was only something that a lot of other people did, too. But I couldn’t – I found myself unable to shake the feeling of appallment that three students from CCHS could be responsible for such acts. I had always regarded student drug use as one of those things that happened a lot less than it actually did – or, if it did occur to the extents reported, was something that occurred at other schools, not Culver City High School.

Substance abuse is, indeed, a serious issue for many secondary schools across the United States – and as such, there are a host of studies and programs designed to combat that issue. One of them: the University of Michigan’s Monitoring the Future study, which discovered that in 2017, just under 40 percent of 12th graders reported using marijuana, along with 25 percent of sophomores and 10 percent of 8th graders.

Many students will likely remember “Red Ribbon Week”, a drug prevention program enacted in middle and elementary school in order to ensure that students know about the dangers of drug use. The program, which still continues to this day, was designed, according to the National Family Partnership, to act as “a catalyst to mobilize communities to educate youth and encourage participation in drug prevention activities.” From the behaviors of many high school students today, however, that program seems to have been lost on them.

Indeed, Culver City High School is no stranger to student drug abuse – this rampant underage use of alcohol and marijuana goes far beyond the actions of just a few 12th graders. Students know this – personal anecdotes involving drug use have persisted for years. I’ve seen it. My peers have seen it. Student drug use is not just something that affects other schools. It affects us, too.

In the face of such an issue, CCHS – and indeed, many other schools – cannot afford to remain complacent. What students do now will impact them for the rest of their lives – and certainly, no one wants these lives to be spent addicted to drugs and alcohol. Sure, we’ve made some progress – the drop in alcohol use, however little, is one – but it hasn’t been enough. Now is not the time to standby. Now is the time to act.