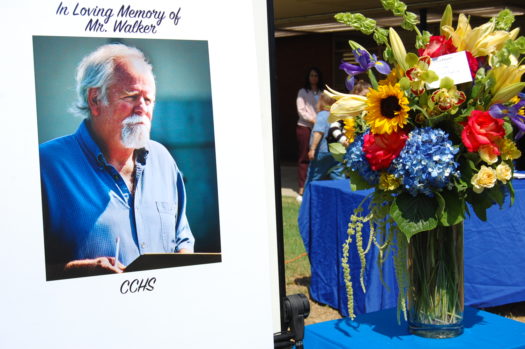 It was on Friday, August 31 that countless students, staff, and loved ones lost Tim Walker, who worked as a student counselor, as well as grief counselor, at Culver City High School for 20 years, after a long battle with cancer.

On September 6, ASB organized a memorial, which was attended by over 120 students, staff, and faculty, to commemorate his life.

Students, staff and faculty came together in solidarity, made most obvious during the incredibly emotional rendition of the song, “Lean On Me” performed by Natasha Mandt-Rauch and Amy Yoon as well as the poem, “We Remember Him” (creatively changed to “We Remember Tim”) delivered by Carlos Valverde creating a respectful silence which embodied the tone of the entire event. During the memorial, there was an unshakeable sense that every single person present was truly heartbroken, and everyone who spoke had been positively impacted by Walker. His impact on students was made clear by anecdotes such as Tano’s, where he described the incredible relationship students had with Walker, going as far as to call him “The Homie Walker.” This was also shown as Rodriguez remembered “He never stopped asking how I was.”

Not only did Walker positively affect students, however. Librarian Asuncion Romo told a story of how Walker came to support him after losing his mother to cancer, even though “[Walker] was already sick at the time.”  Walker’s selflessness was further exemplified after the ceremony, as Mr. Mielke, the Psychology/Sociology teacher, said a few words. He described Walker as “giving, caring, and kids first,” claiming he worked all the way up until September; “right up to the end putting kids first.” Mielke also claimed that he felt it was important that ASB held the memorial, so that as a community, we can “all come together and recognize that that’s happened,” rather than simply recognizing that, “somebody else is in that office now.”

Mielke’s final words,“Tim had a positive impact on so many people” truly exemplify the feelings that all who knew Tim Walker are left to face. The loss of Mr. Walker was a great one, and he will be sorely missed.