CCHS Remembers the Parkland Tragedy After One Year 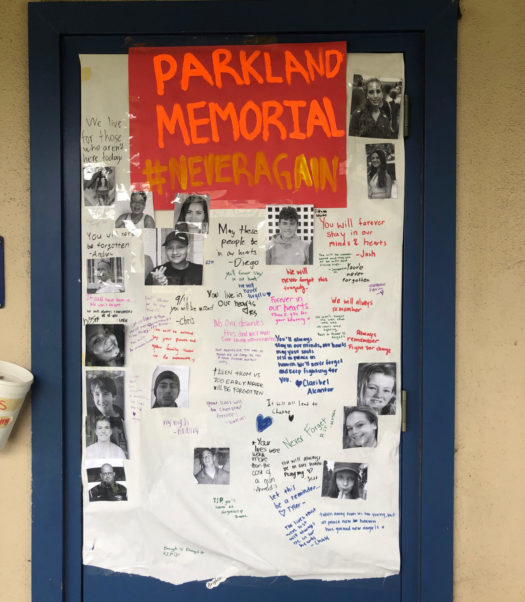 On February 14th, 2018, a gunman entered Marjory Stoneman Douglas High school in Parkland, Florida and opened fire for six minutes. In those six minutes, 17 innocent lives were lost. This tragedy sparked a youth led movement towards stricter gun laws and students all around America rallied together to make their country safer.

One year later, the students of Culver City High School’s Associated Student Body wanted to honor the lives of the seventeen victims. There were no morning announcements that day; instead, a small break was taken during fourth period. Seventeen bells rang through the intercom; one bell for each life lost. In addition to that, they built a small memorial and left out markers so fellow students could leave a positive message. “We wanted to honor the lives that were lost by presenting something in our school that was both small and affective that anyone in our school can feel free to participate in,” ASB member Chase Metoyer said. Not only was this memorial meant to honor the victims, but also to bring awareness to this still very relevant issue that students mustn’t stop fighting for.

Many students participated in the memorial, leaving both heartwarming and heartbreaking messages. “You will never be forgotten -Andrew”, “Your lives were more than the cost of a gun -Ahmad”, “Rest in Power”, “Enough is Enough”. Along with all of these touching messages left on a sign meant to honor the victims, however, were also inappropriate phrases meant apparently as a form of “humor”. At the time I had taken the photo of the memorial, there were three highly visible examples of hate speech and disrespectful messages written on it. This shows the aloofness and ignorance with which gun violence is talked about at this moment.

The fact that anyone would find it the least bit humorous to deface a memorial remembering the senseless and unnecessary deaths of fellow children is thoroughly disturbing. Children in this country have become so numb to horrific acts of gun violence that it has become something for them to mock.

The following Monday, February 18, 2019, the memorial was placed in a glass case in first hall. This was done so that we do not only remember this tragedy once a year, but every day. If we are to hope for a better country, we must never forget our mistakes of the past. Hopefully, those who disregard the movement against gun violence will learn to respect it and those lost in the struggle, and those who fight the injustice will continue to inspire others on the path to a better future.