Fire at Notre-Dame: Remembering the Importance of Historical Structures 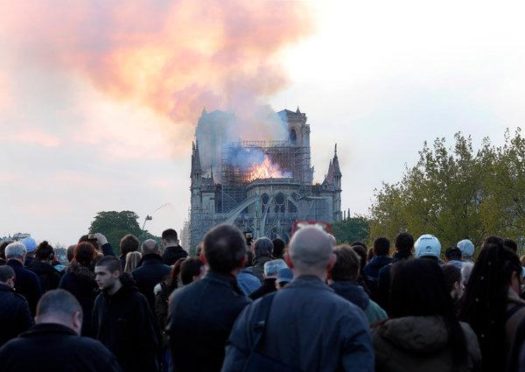 The world awoke to a major shock on April 15 when the cathedral of Notre-Dame de Paris was discovered to have gone up in a devastating fire.

The fire was believed to have broken out at around 6:20 Central European Summer Time, with over 400 firefighters being deployed to help save the cathedral. Despite best efforts, the roof and spire of the cathedral still became quickly engulfed in flames, destroying part of what was once one of France’s most iconic landmarks.

The two towers of the cathedral, however – both of which were essential to preserving the structural integrity of Notre-Dame – were almost entirely saved, and along with them many of the interior relics and artworks. These treasures include the Crown of Thorns, which is believed to have been worn by Jesus during his crucifixion, and the Virgin of Paris statue, which was commissioned specifically for the Notre-Dame cathedral.

Despite the obvious tragedy of the incident, the near destruction of Notre-Dame still provides an opportunity to re-emphasize the importance of this and other such historical monuments. Notre-Dame itself occupies a very important role in Western culture, for instance, as it has left an indelible mark on the lives of people all around the world in the form of literature, entertainment, and the collective consciousness. Yet these structures play also the role of connecting us to to the past, memorializing the whole of history in the form of prominent landmarks.

Notre-Dame’s construction was first started in the 12th century and remains one of the best examples of Gothic architecture to date. Its existence today serves as a constant reminder of not just the medieval times in which it was built, but also the historical eras it has endured through – the French Wars of Religion; the French Revolution; World War II. Such events still hold immense relevance to the world today, and will remain important moving forward in the course of human history.

Of course, these structures are not limited to only those in France, or even in the West – much debate has gone on regarding the influx of funds from wealthy individuals looking to help restore Notre-Dame, as such funding has been limited for other such historical structures in non-Western countries.

An example of this is Port-au-Prince Cathedral.  This other Notre-Dame, completed in 1914, was itself destroyed in the Haiti earthquake on January 12, 2010 – and yet unlike its Parisian cousin, it has received virtually no funding for any restoration efforts whatsoever. This comes in spite of this structure, too, having its own significance, serving as a reminder of Haiti’s poverty and the colonial roots it once had under France’s rule.

It should be clear, however, that such structures do deserve to be remembered, even today – and no disaster, fire or earthquake, should stop us from doing that.