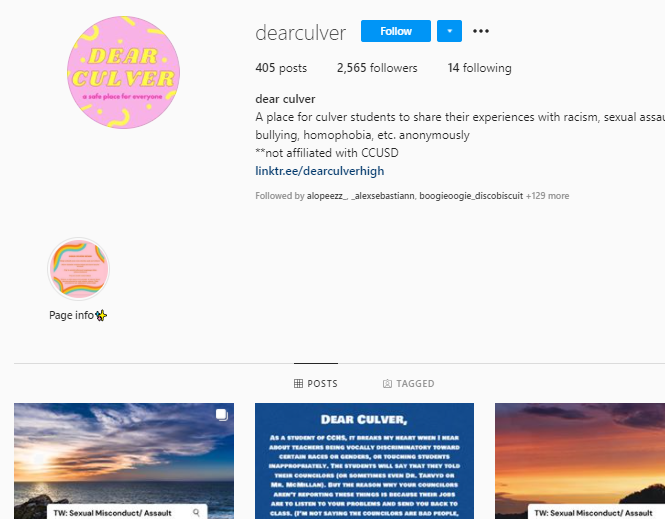 In the midst of a tumultuous pandemic, new revelations have sent shockwaves rippling through the Culver City community. Culver City High School, touted for its diversity and acceptance, is now reeling from accusations of severe misconduct by students and staff alike. From racism to sexual assault, these accusations pull no punches. At the root of this controversy is the courier of these allegations: an Instagram account by the name of DearCulver.

Appearing on July 15, DearCulver is an Instagram account that describes itself as “a place for Culver students to share their experiences with racism, sexual assault, bullying, homophobia, etc. anonymously.” The account started out with the intention of providing a safe space for students and bringing light to many issues present in CCUSD schools.

Immediately, the account gained traction, posting more than 20 stories the very next day and countless still in the following weeks. Hundreds of stories were submitted and still are being submitted, providing a wealth of experiences that are painting a genuinely distressing picture of life at Culver. Narratives found on the account vary wildly in length and subject. Some cover, for instance, perceived inaction by the school in dealing with students’ mental health, while others tackle the issue of racist behavior among the student body. The common thread linking all these stories is their unfiltered approach to heavy topics, as well as an evident distrust of the CCHS administration and a discontent with the status quo.

Inevitably, CCHS was forced to address the situation, with school principal Dr. Lisa Cooper providing a statement only two days after DearCulver’s creation. The statement extended sympathies to all the students that have experienced racism, sexual misconduct, and other upsetting events. It also introduced a CCHS-run alternative to DearCulver in Dear Centaurs, a Google Form through which students could anonymously express grievances directly to the school. The statement also provided a strong resolution on the part of the CCHS administration to communicate with and help students, and specified specific ways of improving in this task.

Though student anonymity and freedom are both essential aspects of DearCulver, this is also where controversy has arisen. The fact that the students who share these stories are unidentified has opened up concerns that the account can be used for slanderous accusations. Compounding this issue is the fact that many of these claims, especially surrounding sexual misconduct, do not provide any concrete evidence of the encounter. Whether these stories are genuine or not, the weight behind these claims are severe, and a falsely associated name could permanently taint a student’s reputation. As one student put it, “it goes against the notion of guilty until proven innocent, ruining lives with these accusations.”

This leaves the account with a difficult question: is the possibility of false accusations worth the safe space and platform that DearCulver provides? DearCulver has led to some positive change: in response to the account’s founding, the school has stated their efforts to better listen to student concerns, and many issues have been exposed to a broader audience. As Dr. Cooper stated: “Whenever someone shares their experiences and stories, they should be listened to and respected, as it is their experience and from their perspective that they are sharing.”

The extraordinary bravery needed to open up about such grievous experiences should never be undermined. Unfortunately, it’s bound to happen, as there are people out there who are ready to exploit this opportunity for their own gain. There have already been stories which in DearCulver’s own words were “completely false and created in order to blackmail a specific individual.” Who knows how many more fake stories have been posted, actively weakening the integrity of DearCulver?

DearCulver is still actively posting, providing an essential outlet for students in these tough times. In just a few weeks, DearCulver admirably roused a powerful wave of sentiment, one that has rapidly influenced the creation of similar accounts.

Though steeped in controversy, DearCulver is ultimately an essential part of a much larger movement in America. It is part of a movement that exposes the vile underbelly of this society and encourages change. DearCulver may be a local endeavor, but it is an important stepping stone in making America a better place.