Cape Town Has No Water 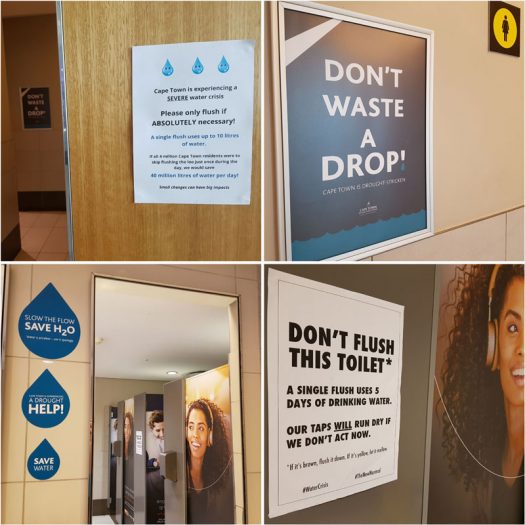 No rain in almost 3 years plus a water supply cut off has the people of Cape Town, South Africa desperate for a solution in times of extreme drought.

Taps were to shut off on April 12, Day-Zero. Soon residents’ water rations will ween down to only 50 liters a day, though schools and hospitals will still get water. As for the rest of the Cape Town, it’s on a path to becoming one of the few cities that don’t have piped water to residential homes and most businesses.

Recently for Spring Break my family and I went to visit relatives in South Africa; Cape Town and Johannesburg.

After more than 24 hours of flying, we arrived in Cape Town.

We’d heard the news of the drought but didn’t realize how bad it was. Even though signs were posted everywhere around the airport and city.

We thought circumstances in Cape Town wouldn’t be different to conditions in LA, until my grandma told us that we would need to be showering for less than 2 minutes over a bucket so that we could use the shower water to flush the toilets. Not to mention, sink water was shut off in all public bathrooms.

The reservoirs are almost empty, even after many vineyard farmers donated their surplus water after harvest.

Flash forward: After arriving from a flight to Joburg, less than 2 hours away by plane from Cape Town, we realized that the city of Joburg had had so much rain fall that flooding had become a problem.

Coming from Cape Town, still in the water-saving mindset, seeing gallons and gallons of water wasted on the street was extremely concerning.

If South Africa has enough water to send to Cape Town, why would they shut down the supply and make 4 million Capetonians and tourists suffer?

Yes, South Africa is commonly known as a Third-World country. However, even though it’s infrastructure is state-of-the-art, and its economy is prosperous, the country’s unemployment rate and government corruption is what brings it down a notch.

Before the water in Cape Town was shut off, a government election had been coming up. There were 2 main political parties in South Africa, The DA, the Democratic Association, and the ANC, African National Congress. South Africa was split among the two, but leaning more towards the DA for the first time ever due to problems with former, corrupt president Zuma who represented the ANC.

The ANC is currently in power even though Zuma recently stepped down because of threats, protesting, and riots from the people of South Africa. A new ‘president-placeholder’, also from the ANC party, has taken his spot.

Because the ANC still controlled South Africa, they controlled water infrastructure and supply to Cape Town and had not been responsible about water usage. They eventually had to shut down the water flow. This strained political divisions because they were accused of not doing as much as they could to help the situation.

This drought is likely to reoccur again, even in the next ten years. Cape Town is currently trying to find other ways of getting water, like tapping into ground water, desalination, and lowering rations.